The conflict between consumption and productivity

First the good news - it's light, compact, reasonably capable for typing, and it has enough battery life for you not to be forever worrying about where your next power socket's coming from. These advantages alone are sufficient for me to take the iPad seriously for note-taking and for document viewing and manipulation, and to stop using the MacBook Air as the thing I carry around all the time. 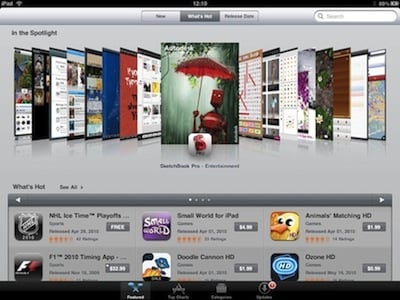 You can check out, but you can't leave

But the bad news is that - in this iteration at least - the iPad is a conflicted machine. It's a media consumption device, and if it's just that it's an expensive one. Not that Steve Jobs is likely to go broke by selling expensive toys, as the sales figures remind us. But alongside this it has a capability as a productivity tool, and it's here that the problems start to tumble out. That doesn't mean it doesn't have a value there, but it does mean that it has considerable potential to become an infuriating device to use.

So let's look at the infuriation: exchanging files, the iTunes tether, and the iPad's status as a big iPhone that can't make phone calls. These are all related. Apple won't let you anywhere near the iPad file system, and each app on the iPad has its own storage space. So if you've been using a file with one app, there's no way you can use it with another app without exporting it and then importing it into the other app. And how do you import and export?

To import, you connect the iPad to your computer, go to the apps tab of your big iPhone iPad, and look down at the bottom to see which of your apps you want to open the file with. Then you click Add and get the file from your computer, then it trundles along the wire to the iPad. After all this you can open with the app you sent it to, but only with that app.

Sending it in the other direction is possibly even more baroque. In the case of Apple's iWork applications, you go to My Documents, press the 'send' icon at the bottom of the page, and up come three options: send via email, share via iWork.com and export. Note that you can't save 'to' anywhere, you can't save at all because the iWork documents save themselves all the time, and as far as you're concerned there is no 'to'. The first options do what they say on the tin, while 'export' lets you export the file in a couple of different formats to... where?

OK, back to iTunes, connect your iPad, go to the apps tab for your iPad, scroll to the bottom, click on the app you exported it from, highlight the file, then click on Save to, and save the file onto your computer. You can't do any of this while you're working on the document itself on the iPad; you need to switch over to the My Documents section.

Nor can you name files on the iPad. Highlight a template and click on the plus sign underneath it, and you get an option to duplicate the document, in which case it'll open a file with 'copy' appended to the template's name. Edit directly from the template, and you'll find it creates a new file with '1' appended to the template's name. It gives itself two different ways to create non-relevant filenames, and won't let you have even one?

It's possible to work around some of the iPad's insane file sharing restrictions using Avatron Software's Air Sharing HD, which is as essential from the point of view of sanity preservation as it is for getting stuff done. HD, the iPad version of the Air Sharing iPhone app, lets you mount the iPad as a drive and copy files back and forth wirelessly, and also via iTunes and the cable (which is a teensie bit faster if you're thinking of copying a movie). It doesn't give you access to the iPad's file system (it's forbidden, remember?), but it lets you organise your own folders within the Air Sharing sandbox. 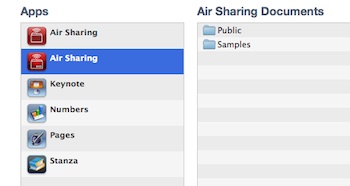 So you can use it to move a wide range of file formats (including audio and video) onto the iPad and then view them, but you can't use it for manipulating those files, nor can you transfer a file with Air Sharing and then manipulate it with another app - eg one of those in the iWork 'suite', which is actually rather more like three separate apps that don't talk to one another.

I could - as you may have gathered - go on. The iPad's file sharing is laughably awful, and needs fixing. But will it get fixed? And how did it get like this in the first place?

There are a couple of possibilities. Apple might - working on the basis that this is intended to be a mass-market consumer device - have thought that customers needed to be shielded from filenames and file systems just as much as file systems needed to be shielded from customers. If this is the case, those of us wanting to use the iPad as a business tool have come to the wrong place, because Apple is not going to help us.

Or maybe Apple just messed up - maybe it was focussing on the consumption device aspect, and didn't give adequate consideration to the productivity side. This seems to me to be at least possible, even understandable. There have been many unsuccessful productivity-focussed ultralight devices (I've used quite a few of them), and as Apple has demonstrated with iTunes, consumption is where the money is. But, if Apple isn't going to take iPad productivity seriously in the longer term, why is it selling iWork productivity apps for it? It seems to me that's grounds for hope.

The third possibility that occurs to me is that the iTunes walled garden has reached the end of its usefulness. It worked pretty well with the iPod, and although it initially seemed bizarre (and it's still annoying) that the iPhone came with brainless Bluetooth and no Wi-fi iTunes capability, iTunes still kind of worked. But the more non-entertainment, non-copyright stuff you're trying to move around, the less credible iTunes becomes as the way to move it. Yes, somebody owns this music and it's probably not you, so you can grasp why Apple won't let you sync your phone or your iPad with more than one computer at a time. But you took these photos and you wrote these documents, so why is Apple messing you around, routing you through iTunes and threatening to wipe them? That message, incidentally, is a particular fail if Apple's trying to shield novice users from scary stuff.

The difficulty here is that Apple's restrictive file transfer system is putting a brake on the ability of dual-purpose consumer/productivity devices like the iPhone and iPad to interact with other devices and computers. You can fiddle with the switches in iTunes in order to determine what syncs with what, which apps go with which device, but these are activities that have a lot in common with rearranging your CDs in alphabetical order, and they're certainly not about making life easier for you. Essentially, iTunes is over, and Apple surely knows that.

But consider the sunlit uplands, and the possibilities. Like the iPhone, the iPad has some syncing capability with Apple's MobileMe. Wouldn't it be handy if it were able, like a Mac can, to back itself up there as well? And to have its own version of Back to my Mac, so you could link to your home or office computer from any Internet connection? Wouldn't it be great if it could sit on a wireless network and share files with computers, just like you'd expect a great productivity device to do? Ah, but how does Apple do all of that stuff without knocking great holes in the iTunes DRM wall?

The solution is by no means straightforward, as this anonymous Android developer explains. With Android, the ability to back up and restore apps also gives users the ability to steal apps, so how does Apple give more access to the file system without trashing the marketplace it's built with iTunes?

Currently I understand the difficulties the company finds itself in, but I'm likely to get a lot less understanding if there's no sign of progress in the next update.

And despite the current restrictions, as I said at the outset, there's enough good about the iPad as a productivity tool to make it a keeper. The on-screen keyboard works fine, even if you turn off the click in meetings (which you should - otherwise people will hit you), it's fairly light, and it has reasonable battery life. I've gone for a 3 Pay as You Go MiFi unit rather than getting a 3G iPad, on the basis that I'm abroad frequently, and don't want to get hammered on international data roaming. I'll likely pick up the Verizon equivalent next time I'm in the San Francisco office, and see if I double up with a French SIM in the 3 MiFi unit for when I'm in France.

And will I carry it around instead of carrying the Air around? Actually, it seems to me I haven't got a lot of choice, as the combined weight is too great to be practical. So a machine at either end it is, with the iPad in the middle and the Air for trips. And we'll see how we do on those file transfers… ®