EMC was the top vendor with a 25.7 per cent revenue share, followed by Symantec with 15.4 per cent, and IBM at 14.2 per cent. IDC's press release quoted the wrong figures for Symantec and IBM, giving them 19.8 per cent and 15.4 per cent respectively, but a table in the analysts' full report, available to IDC subscribers and not released to world-wide tech hackery circles, had the right numbers.

IDC spokesperson Mike Shirer told us: "I believe the figures in the table are correct and the text in the press release is incorrect." He's checking to make sure and we'll update this story if he finds different.

If we chart the quarterly revenue shares, using the numbers in IDC's Q4 2011 table, and previous tracker stats, we get this picture: 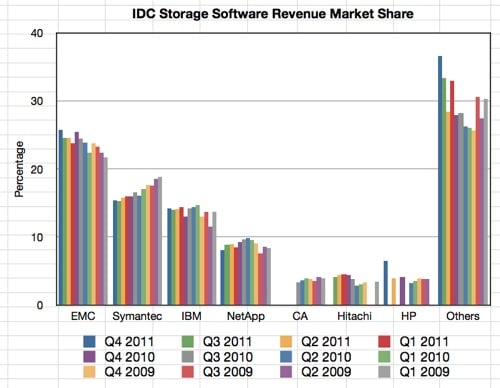 CA was included in IDC's "others" category in the fourth 2010 quarter and has stayed there. Hitachi Data Systems got lumped into that category in 2011's fourth quarter. HP has dipped in and out of it, which is why it has separated bars on the chart.

We can see that, overall, the "others" category is growing with spikes. That's not surprising with CA and then Hitachi being subsumed into it, and HP bobbing in and out. A line chart of the same data shows this. 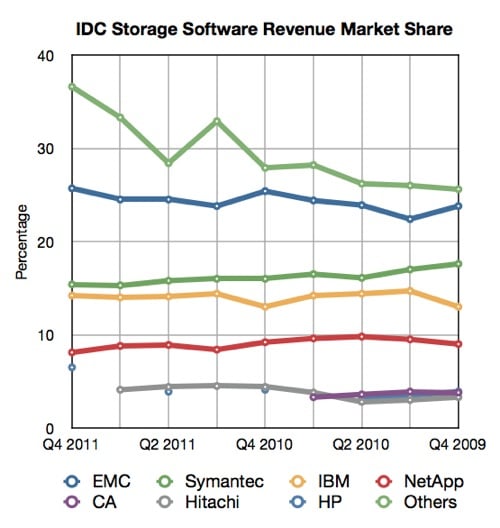 It looks as if the "others" category, the highest value green line on the chart, is growing fastest of all, which indicates that the storage software market is less dominated by the major suppliers than the storage hardware market. This tendency might be countered over the next few quarters if storage in the cloud takes off.

We would expect HP (the blue circles) to start showing a consistent presence from now on, considering that it has bought Autonomy.

Storage and Device Management as well as Data Protection and Recovery helped to propel the market into record territory as the two functional markets increased 17.3 per cent and 13.8 per cent respectively during the quarter. … Though smaller in size, the Archiving software market was also a high growth market with revenue up 12 per cent during the calendar year and 7.3 per cent year over year in 4Q11.

IBM leads the archiving storage software market with HP in second place, following its acquisition of Autonomy which had snapped up part of Iron Mountain.

What can we conclude? EMC is doing best of all the suppliers but it can do better; its Documentum software is a less than stellar performer. That is bad news for Symantec which faces continuing decline unless it does something dramatic, like buying CA, another share-losing supplier, or goes for a high-growth startup like Dropbox.

It's odd: looking at the Symantec part of the chart you get the impression it is just sleep-walking, with NetApp keeping it company. NetApp sells its software to its disk array customers and, as it's losing market share in storage hardware, it's hardly surprising it's losing it in storage software. ®