How to launch people into space...

...if you want them to survive the journey

It's Not Rocket Science Last time, I explored how difficult it is for computer hardware to operate in the noisy - from an electromagnetic radiation perspective - environment of outer space. Today’s topic is people. Don’t worry, I won’t be boring you with life support systems. That’s the least of a spacer’s worries. Before you need to worry about keeping your astronaut breathing, you’ve got to get them into orbit first, in a condition where the oxygen will still be required.

The US military has a long history of spinning people in circles for fun to find out just how tolerant they are to G-forces. There have also been some rather more gruesome tests performed by certain less-than-ethical nations in the earlier half of the 20th Century. The result of all this is a good understanding of exactly when you need to worry about your lungs collapsing or needing to press your eyeballs back into their sockets.

G-forces are simply acceleration induced by the Earth’s gravity under freefall, and there are three types that need to be dealt with:

Although all three of these can be encountered in a space mission, radial and angular can be controlled under normal operating conditions and are only experienced in anomalous events. Linear G, however, is unavoidable if you want to get off the ground at all.

Nasa's g-force centrifuge: survive a spin in this and you can go into space... maybe
Source: NASA

Unlike a cargo payload, the human body doesn’t react uniformly to G-loading, so an XYZ coordinate system must be defined. The Gz axis runs vertically through the upright body, with +Gz acting downwards to compress the spine. Gx acts perpendicular to the chest with +Gx compressing the lungs. Gy acts sideways into the limbs.

The effects of G-loading are primarily caused by cardiovascular pressure changes, these are most dramatic when accelerating the body in the Z axis. Under positive Gz the subject will experience difficulty moving against 2g. At 3g lifting arms and legs is almost impossible and vision begins to blur. At 4g you can’t move at all. Beyond 5g, you’ll black out after five seconds, and longer exposure results in what space scientists call "G-LOC": G-induced loss of consciousness. The astronaut’s blood pressure is insufficient to combat the acceleration and reach the brain, thus starving the higher centres of oxygen.

Under -Gz, the opposite occurs and by 2g subjects report throbbing headaches due to excessive blood pressure in the skull and redout at 3g as the conjunctiva is forced over the eyeball. Testing beyond 4g is almost intolerable beyond six seconds and G-LOC occurs rapidly.

Gx is a much more pleasant sensation than Gz, but that’s not to say it’s all fun and rollercoasters. That being said, if you’ve been on Stealth at Thorpe Park, then you’ll have an idea of what +4.5Gx feels like - at least momentarily.

In a more extreme case, humans can tolerate +2Gx for 24 hours with slight abdominal pressure. When you get up to 3g though, there is measurable compression of the chest with breathing and speaking difficulties. Around 6g heartbeats start to become irregular and at 8g limbs can’t be lifted. Above 12g breathing is nigh on impossible and is accompanied by extreme chest pains and loss of vision. However, G-LOC is uncommon.

-Gx results in similar effects, but without chest compression or breathing difficulties.

Little research has been done on ±Gy, but it is known that around ±5g hemorrhages occur in the arms and legs. 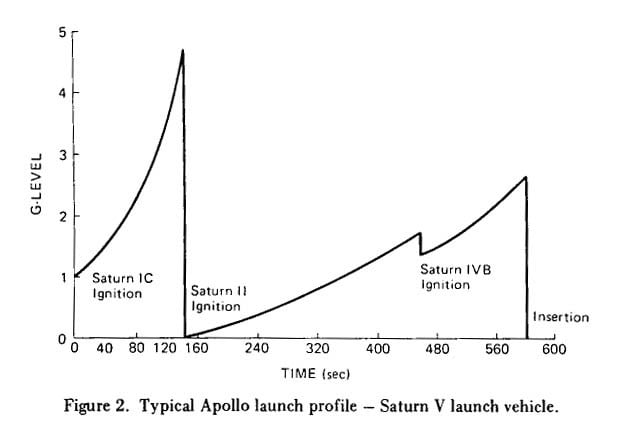 While a cargo payload - satellite, space probe, Mars rover, nuclear hovertank with laser canon - may be able to withstand 30g or more during a launch, it’s clear that people can’t - at least if you want them to do science or zap aliens when they’re up there.

As a result, rockets carrying humans tend to have relatively low thrust-to-weight ratios to ensure minimal g-loads. For example, the Mercury, Atlas and Gemini missions put the likes of Shepard, Glen and Grissom through g-loads 6.4g for 54 seconds and 6g for 35 seconds, while folks going up on Apollo and Skylab trips experienced only around 4g for similar time periods.

To end up on a lunar bound coasting trajectory, Apollo astronauts were subjected to three different levels of acceleration, one for each stage of the Saturn V. The first of these accelerated from 1g to 4.5g over the course of 150 seconds. Next, the second stage shunt was kept at to 1.8g for 300 seconds to limit maximum dynamic pressure. The third stage has a bit more of a kick and shoved along at between 1.2g and 2.6g for the last 130 seconds.

Despite the minimised acceleration, this still isn’t tolerable to humans sitting vertically, so every single human space launch that has ever occurred has had astronauts lounging back at a leisurely angle of about 12 degrees from horizontal. 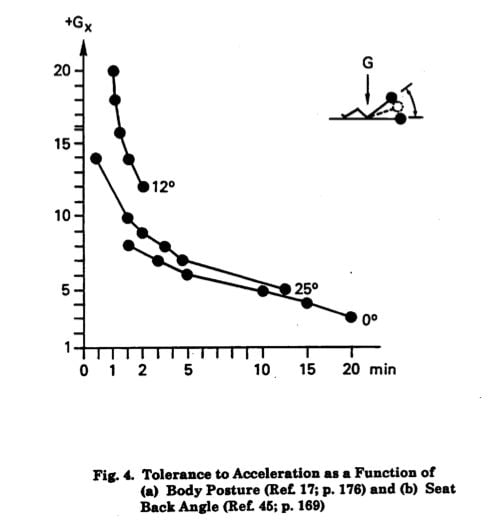 By ensuring that their seatbacks are reclined for take off, it’s possible for trained astronauts to tolerate forces in excess of 10g for a few minutes.

So sit back and relax.... it’s the only way to stay alive if you want to get up there.

Getting back, though - that’s a whole other debacle... ®

Want to know more? Check out these two items: