Micron has built the world's smallest 3-bits per cell NAND chip, targeting USB stick memory and the like, while Facebook's open source hardware guru has indicated such chips could be used in its cloud's data centres providing ultra-cheap flash storage.

TLC (Triple-Level Cell) NAND Technology has 3 bits per cell, one more than in standard MLC (Multi-Level Cell) flash and it provides cheaper flash storage for a given capacity level - although access speed is slower than MLC and its working life in terms of write cycles is much lower. MLC flash built using a 20-something nanometre process size could have 3,000 raw write erase cycles whereas equivalent process TLC flash could have less than a third of that.

Even with over-provisioning to extend its endurance, TLC flash has not found favour in data centre use cases. Instead it has been used for USB memory sticks and camera flash cards - in a SanDisk focus for example, where its write life is not so important but its cost is.

Micron has just built a 128Gbit TLC chip using a 20nm process which is just 146mm2 in area. That's 12.083mm a side, slightly bigger than a small fingernail. It means TLC flash applications can cram more capacity in the same physical size as before.

Micron thinks some 35 per cent of shipped NAND gigabytes this year will be used by removable flash storage products like camera cards and USB sticks. It's a big market for small chips. 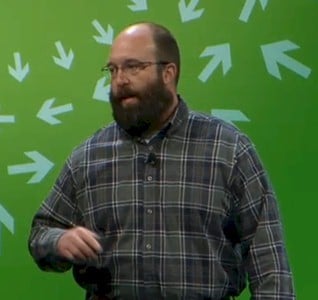 At the same time Facebook's Open Compute Project prophet, Frank Frankovsky (right), has come down from the server, networking and storage mountain with another OCP commandment akin to his "Thou shalt not commit gratuitous differentiation" pronouncement. This time it's: "Thou shalt use TLC flash for cold data" - so to speak, of course. If he's right then TLC flash demand could become much higher.

There's a recognition that TLC flash is cheap as chips and much faster to access than disk or even, wash your mouth out, tape. Frankovsky, speaking to Ars Technica, said you could devise a controller algorithm that tracked cell status and maintained, in effect, a bad cell list like a disk drive's bad block list. Dead TLC flash cells would just be ignored. By knowing which cells were good and which were bad you could build a cold storage flash resource that would be cheaper than disk, he reckons, because you wouldn't need techies swarming all over the data centre replacing broken disk drives from the tens of thousands that would be needed.

Facebook can get away with rewriting the server, network and storage product rules because it wants so much of the stuff for its own use and wants it simplified so it costs less. It also wants all the useless differentiation stripped out and junked - for example the fancy front bezel impeding the airflow.

The scale is what makes Facebook's re-writing of base compute product design and build rules possible, and suppliers nervous. Server, network and storage product suppliers look on what Margin-killing "Moses" Frankovsky and his employer are doing and tremble. ®