The scientific revolution has stalled, here's how to kickstart it

ISSCC Microelectronics pioneer, Caltech professor emeritus, and all-around smart guy Carver Mead believes that the scientific revolution that began with the discovery of special relativity and quantum mechanics has stalled, and that it's up to us to kickstart it.

"A bunch of big egos got in the way," he told his audience of 3,000-plus chipheads at the International Soild-State Circuits Conference (ISSCC) in San Francisco on Monday.

Much more work needs to be done to restart that revolution, Mead said, with the goal of explaining in an intuitive way how all matter in the universe relates to and affects all other matter, and how to explore those interrelationships in a way that isn't "buried in enormous piles of obscure mathematics."

If you're not familiar with Mead, you should be. Now 78, he received the National Medal of Technology in 2003, cited for his "pioneering contributions to the microelectronics field, that include spearheading the development of tools and techniques for modern integrated-circuit design, laying the foundation for fabless semiconductor companies, catalyzing the electronic-design automation field, training generations of engineers that have made the United States the world leader in microelectronics technology, and founding more than 20 companies including Actel Corporation, Silicon Compilers, Synaptics, and Sonic Innovations."

Those credentials have earned Mead the right to be listened to — although he'd be the first to argue that mere credentials and achievements don't guarantee intelligent thought. In fact, they can cause intellectual ossification.

To illistrate that point, Mead told the story of how Charles Townes, the inventor of the laser and maser, took his ideas to the leading quantum-mechanics nabobs at the time, Neils Bohr and Werner Heisenberg.

Mead said that we're all taught that there was a revolution in scientific thought that started with relativity and quantum mechanics. "Actually, that's not the case," he said. "A revolution is when something goes clear around. And what happened starting in the first 25 years of the 20th century was that there was the beginning of a revolution, and it got stuck about a quarter of the way around." 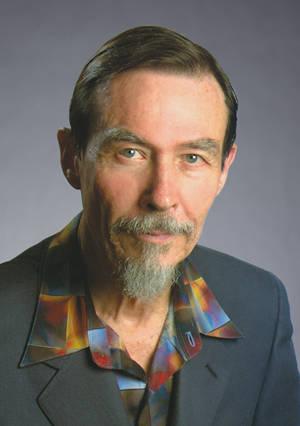 And it remain stuck, he believes. "What we're living with today is a bunch of mysteries and misconceptions that came about partly because people couldn't imagine nature being as interesting as it really is, and partly because a bunch of big egos got in the way and wouldn't let the revolution proceed."

From Mead's point of view, the key to a more intuitive explanation of the universe lies in not only the interrelationships of matter and forces, but also a better understanding of the electron. "We need to treat the wave functions of our electrons as real wave functions," he said. "I have found personally that I had to go all the way back and reformulate the laws of electromagnetism, starting with the quantum nature of the electron as the foundation."

"Modern science started with an idea that was really given to us by Galileo," he said. "The idea was the isolated experiment. You took something and you very carefully sheltered from all the influences around, and then you were seeing the fundamental physics of that object."

That methodology, he said, served science well and led to tremendous advances. "But now it's holding us back from a deeper understanding of how the universe works."

A more holistic approach – if you'll forgive your humble Reg reporter from using that truly Californian term – was suggested by none other than the Austrian physicist and philosopher Ernst Mach. As Mead tells it, Mach "took Newton to task. He said, 'Look, your idea of absolute motion is a stupid idea. Motion can only have meaning when what it is that's moving is moving relative to other matter in the universe'."

Einstein, of course, was mightily influenced by what the ex–patent clerk called Mach's Principle, which Mead explained as the proposition that "the inertia of every element of matter is due to its interaction with all the other elements of matter in the universe."

We haven't fully followed that investigative road, Mead said. "Instead what we've done is we've treated isolated objects as if all their attributes were just given us, and [we] haven't asked where they came from," he said. "Things like the inertia of an object, the rest energy of an object, the velocity of light — all those things. We have a list of fundamental constants that we're not allowed to ask where they come from."

If we want to get that stalled 100-year-old revolution unstuck, Mead said, we've got to ask – and discover – where those constants come from, and not just believe in them as handed down by academics and buried in mountains of math. We need to discover their basis in the interactions and interrelationships of all matter in the universe.

"It's a mind-opening experience to think about physical law this way," Mead said. "I personally am spending the entire rest of my life doing that. When we're done with this revolution, we will have a way of thinking about the universe that's vastly more intuitive and vastly more inspiring."

In a conference stuffed with sessions bearing titles such as "A 2.5GHz 2.2mW/25μW On/Off-State Power 2psrms-Long-Term-Jitter Digital Clock Multiplier with 3-Reference-Cycles Power-On Time", Mead's musing were a welcome big-picture refresher. ®