Geek's Guide to Britain Hanslope Park sits just outside the small, quiet North Buckinghamshire village of Hanslope. I grew up there, and the Park and its occupants would always be mentioned by conversing grown-ups in suddenly hushed tones. Who might be listening? Other villagers were quietly pointed out with the words: “You see him? He works at the Park, he does.”

Today the site might well fail to attract the attention of passing motorists, but in the 1970s and 1980s, while you couldn’t see much of the facility itself thanks to the thick growth of trees and bushes that surround it, the plantations of sinister masts that dotted the nearby fields rather gave the game away. They’re mostly gone now, pulled down in the 1990s to be replaced by more sophisticated spy satellite pick-ups. 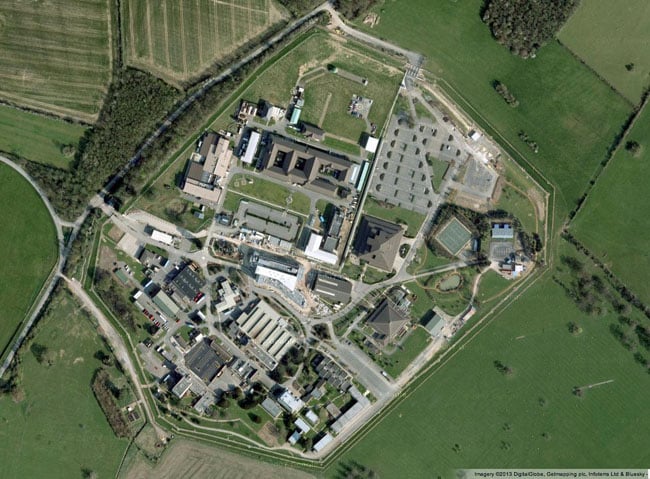 Hanslope Park from above. Note the sole remaining aerial in the bottom right of the picture
Source: Google/Digital Globe

Hanslope Park, once the scene of notorious murder and suicide, has long been home to spooks - and, it’s claimed, not just of the corporeal kind.

The site is now officially named Her Majesty's Government Communications Centre (HMGCC), but the Park and the small, undistinguished stately home at its centre were acquired after World War II by the Foreign Office, which soon established a listening post there. The locals widely believed the station was tuning in to Russian transmissions, perhaps giving us an advantage over other Britons should the balloon ever go up. There was talk of nuclear bunkers and a secret way from the Park to the the M1 motorway, which passes by just a kilometre away.

The all-seeing eyes of Google Earth or Bing satellite photography reveals no such roadway. Unless, of course, it’s underground...

Curiously, it was reported in the 1980s that a chap who claimed his car had broken down on the M1 late one night, was picked up trying to enter Hanslope Park. He said he had made a beeline for the facility’s bright yellow sodium lights in the hope of finding assistance. He would have had better luck - and less tired legs - if he had tried either of the two farmhouses between the motorway and the Park.

During the 1970s, locals who worked at the Park might, when asked, mutter something about the Foreign and Commonwealth Office - no one had thought of the ‘I could tell you but I’d have to kill you’ gag back then - a line that suggested they were really little more than clerks from the days of Empire. It was called the Diplomatic Wireless Service, and it wasn’t hard to imagine messages coming in announcing coups d’état and incidents in far-flung capitals.

Not that the intelligence community connections were unknown, even if then not officially confirmed. Hanslope is only 20 miles or so from the south Milton Keynes town of Bletchley, home to a better-known Park with a shady wartime history.

As the HMGCC itself puts it, “We’re a short drive from the thriving towns of Milton Keynes and Northampton. We also benefit from good transport links, with Milton Keynes station only 35 minutes to London Euston on a fast train”. The local church, St James - described by architectural historian Nikolaus Pevsner as one of the finest spires in the country, and easy to locate at ground level for many miles around - forms part of the agency’s logo. It is “involved in fascinating, challenging work of national importance”.

Or, as the Guardian newspaper once put it, a place “where teams of scientists – real-life versions of Q, the fictional boffin of the James Bond films – devise technical aids for the Foreign Office, MI5 and MI6”. 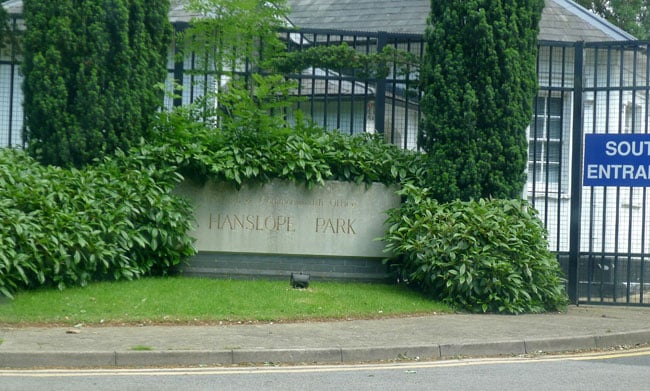 As much as you can see before the guards arrive: Hanslope Park’s main entrance

Even the HMGCC admits its boffins “work across the whole product lifecycle, from research and design to development and production. We deliver bespoke communications systems, applications, hardware and software to meet our customer’s unique requirements”. Hanslope Park is, the organisation that runs it modestly claims, “a creative powerhouse and centre of excellence”.

“Across the site, there are a number of labs and teams made up of professionals from a wide variety of backgrounds, forming a melting pot of ideas where innovation is the main objective. From Software Developers and Mechanical Engineers to systems specialists, electronic experts and even a fully functioning manufacturing plant, we have a huge range of professionals on board - including our vital corporate and support people.”

HMGCC’s own "come and work for us" video shows parabolic satellite uplink antennas, banks of black supercomputers and, this being Blighty, a canteen selling tea and buns. The video shows the Park’s mod cons - including a gym for the staff, or perhaps trainee spies - and no sign of the 18th Century manor house, once home to Squire of Hanslope Park Edward Hanslope Watts in the late 19th Century and early 20th.

On Sunday, 21 July 1912, Watts, 67, and his wife Edith were walking back from the village and the morning’s church service. As they neared their home - they were just a few dozen yards from the Park’s former gatehouse - two shotgun blasts rang out and Watts collapsed to the ground, blood gushing from a head wound. One of the two shots hit him in the back, though it’s not known whether the blast was intended for the Squire or his wife. She was reported to have seen the shooter.

The shots attracted the attention of others from the Park. Another shot was heard. Shortly afterward, the body of William Farrow, the Squire’s head gamekeeper, was found in the bushes to the left of the road. Farrow was dead, his shotgun resting against his body. He had fired the weapon into his own mouth. 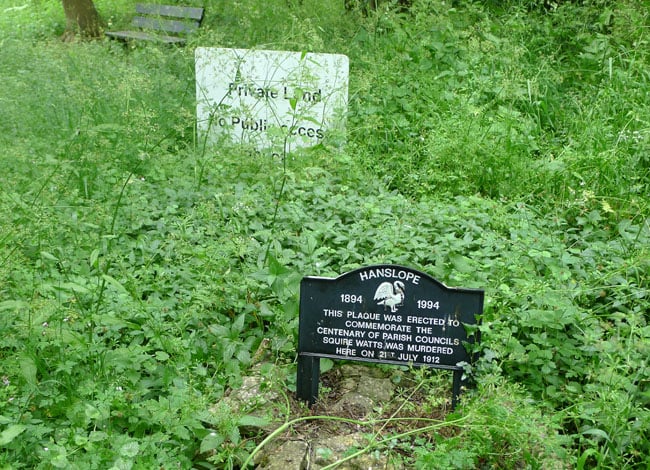 Edith was related by marriage to General Sir John French, who, two years later, would lead the British Expeditionary Force to France and Belgium at the start of the First World War. The story of the shooting was written up by the Times and the Daily Mirror.

Why did Farrow fire on the couple? At the inquest held the following day, the jury found him guilty of wilful murder. It was said he had taken revenge after being told by Watts that his services were no longer required.

The event was soon forgotten, but from then on there were tales of ghostly sightings and experiences in and around the manor house and on the road to Hanslope. Whose spectre haunts the spooks of Hanslope Park? William Farrow? His victim, Squire Watts? Or Watts’ distraught wife, Edith? We will never know, though a neigbour of mine in the village once claimed to have been grasped on the shoulder while at work in the manor house. No one was there when he turned round, but they’re a rum lot up at there the Park, eh, Mr Smiley?

These days the only tapping to be heard at Hanslope Park is the rattle of keyboards and the staccato morse on the HMGCC promo video. With the arrival of the HMGCC moniker, the site has been expanded considerably in the past decade or so. There are visibly more buildings there than there were when I used to cycle past as a kid, though in summer time it’s hard to see past the surrounding greenery. 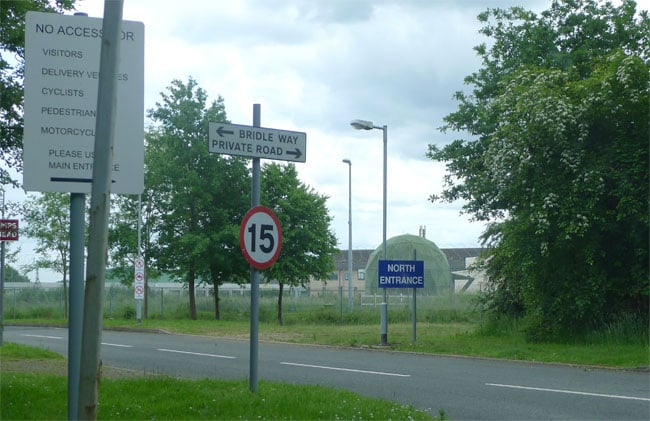 Some of the extra space is said to be occupied by MI6’s Technical Security Department (TSD), but in the information age you clearly need more staff to go over the data picked by the the likes of GCHQ Cheltenham and RAF Menwith Hill, North Yorkshire than you do for producing spy gadgets.

And not just the latest information. Hanslope Park is home to the SIS’s archive, if we're to read between the lines of a 2009 BBC Radio 4 series about MI6 called Century in the Shadows. It noted the presence of “cavernous vault” of historical SIS information “somewhere just outside London”. Two years later, confirmation of sorts came from the Foreign Office itself in a document describing the movement of FO colonial papers to an trove in Hanslope Park.

Much of HMGCC’s kit - that not developed internally, that is - comes from HP, which was contracted by the Foreign and Commonwealth Office in 2005 to design and build the next generation of the FCO’s "Firecrest", the system that connects Britain’s embassies and other diplomatic outposts around the world. Signed in 2005 and expected to be implemented by February 2012, the "Future Firecrest" deal was worth £401m.

And it’s appropriate, don’t you think, that HP (Hanslope Park) was kitted out by HP (Hewlett-Packard).

Providing a home for the technology was a new “secure hub for our global Information and Communications Technology (ICT) infrastructure”, construction of which began in 2005. Part of it was the FCO’s “new centre for cyber security”, opened in November 2010. The ICT housing is known simply as “Building 38”. 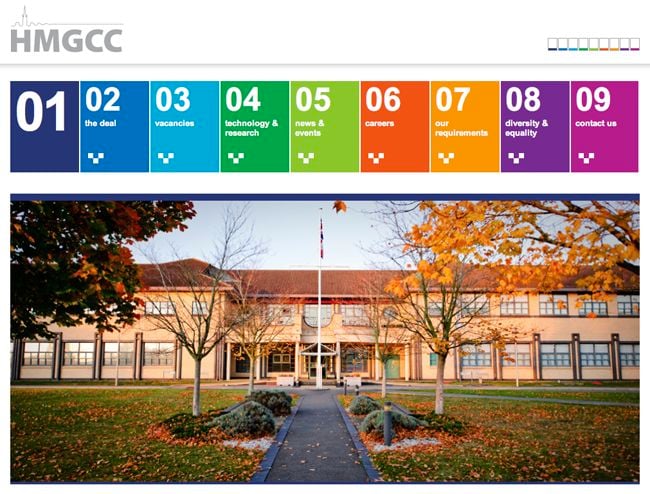 Hanslope Park’s modern centre, as seen on the HMGCC homepage
Note the highly recognisable St James church in the logo

The FCO also maintains a 612m2 “goods store” at Hanslope Park. These are maintained by FCO Services, the commercial wing of the FCO, which sells “secure” IT and communications - satellite, landline and mobile - testing services plus “perimeter and protective security” services too.

”With over sixty years’ experience as the UK National Authority for Counter-Eavesdropping (UKNACE), we’ve got the technical means to detect or prevent eavesdropping devices compromising the security of your site,” its website says. It also developed the Government Secure Application Environment (GSAE) cloud computing infrastructure.

Still, it can’t be that hush-hush when so many FCO operatives mention their involvement on their LinkedIn pages. ®

Hanslope Park is situated four miles north of Milton Keynes and 10 miles south of Northampton, between junctions 14 and 15 of the M1.

Not open to the public.

Nearby Hanslope is home to the Watts Arms, which was a shocking pub in my day but now scores 3.5 out of 5 in the Good Pub Guide, is recommended by the local branch of Camra, has some decent real ales and welcomes kids.