How solid, stocky Linux babe kept relationship 'open' but stayed true to you

Anniversary Today Debian marks a milestone not many pieces of software last long enough to see: its 20-year anniversary.

Debian has become the foundation of dozens of other Linux distros. It’s the basis of all manner of embedded systems – which means many of the uninitiated use it without knowing – and it boasts a customers list spanning governments and giant globo-corps alike.

And it has achieved all this without the continued presence of its founder driving the show in the way that Linus Torvalds drives Linux, and despite delayed releases and public spats.

But that isn’t even the best bit.

Solid as a rock

What's even more remarkable about Debian is that the project behind it continues to churn out great, reliable software and that Debian remains - after all these years - true to the vision (and accompanying manifesto) that accompanied its birth.

The Debian Project was founded by Ian Murdock and officially brought to life on 16 August, 1993. With the backing of the Free Software Foundation's GNU project, Murdock set out to create what he called "a distribution that lives up to the Linux name".

Murdock's vision for Debian was to "carefully and conscientiously put together" a distribution that "will be maintained and supported with similar care".

As you might expect, Linux was in its infancy and installing it was no small feat. The concept of a "distribution", as we know it today was relatively new. Certainly maintaining a collection of code as vast and tangled as Debian was unheard of. 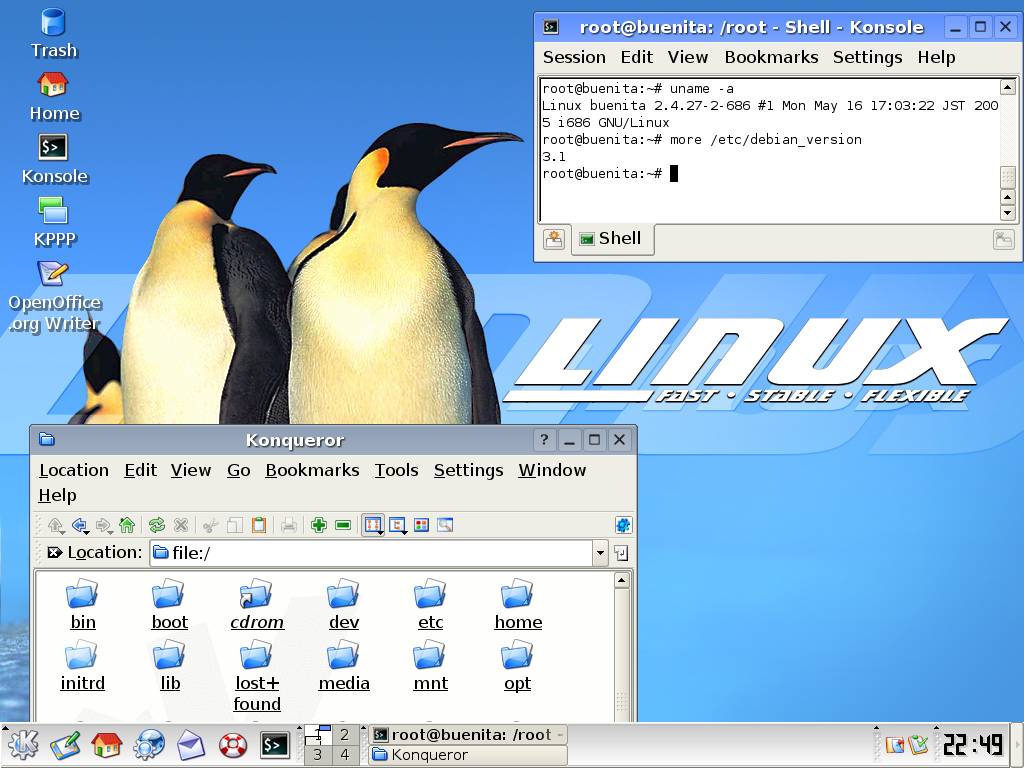 Debian 3.1 KDE desktop ... a screenshot of the penguin-powered OS (click to enlarge, source)

Indeed to this day, while Debian is clearly not all sunshine and roses, the stable channel release remains one of the most rock solid, well-built Linux distros in the community. That's why Ubuntu and countless other distros start with Debian's core - because they can depend on that stability.

While stability might be Debian's hallmark (though there are of course other channels which offer more cutting-edge releases), the other aspect that makes Debian stand out from the crowd is Murdock's emphasis on doing everything in the open - anyone can contribute, everyone can see what's going on.

That principle has since become the guiding force for many a free software project, but today it is becoming less common again, which is precisely where Debian still looks like a leader even 20 years on.

The distribution – the actual packages and code that make up Debian – are, in the long run, only half of what makes Debian important in the open software world. Debian's real strength is philosophical and cultural.

That Debian remains free – in nearly every sense of the word – in a largely unfree world, makes it more than a Linux distribution: it makes it an icon.

Today's Debian occupies a role in the open software world not unlike that of Patti Smith in the punk rock world: the elder statesman, or woman as it were, that never sold out.

Jumping out the Windows

For most of us the journey into Linux and often free software more generally starts with distros like Ubuntu or Mint, which both make great starting points for anyone moving away from software like Windows. They're friendly for newcomers, they have graphical wrappers for most tools and for the most part they "just work".

But as you become more familiar with Linux and begin to dig deeper into the system, installing and customising countless packages along the way, you will inevitably brush up against some disdain for the gateway distros like Ubuntu.

What is this 'Debian' of which you speak? 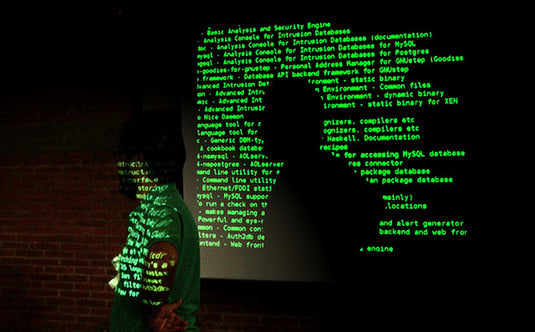 Then the newbie embarks on a progression down the "rabbithole" of free software, one that is traced in some detail in E Gabriella Coleman's Coding Freedom, a book about Debian hackers and free software more generally.

Criticisms range from the ideological – the inclusion of non-free software, for example – to the more practical, for example the fact that some distros are slow to give their code back to the projects that form their core.

At some point the Linux newcomer, fast morphing into an intermediate or even advanced user, decides to install these source distros they've heard about on a spare partition or perhaps just a virtual machine. And the progression continues further down the rabbithole until finally a new Debian user is born.

But there is often parallel transformation that happens under the surface of something as seemingly trivial as switching distros. Somewhere along the way, the curious user morphs not just into a more advanced technical user, but a more involved user: a user who isn't in it just for the software anymore, but is part of a philosophically different approach to software. And more involved users are exactly the people that make Debian Debian.

And, after two decades, it’s a good point to take stock and ask where Debian is heading.

To understand what the next 20 years of Debian will look like, you need look no further than the core document that has guided these first 20 years: the legendary Debian Social Contract. It's a kind of Catcher in the Rye for the free software movement, with the power to galvanise young developers in the spirit of something bigger than just making cool software.

With Debian you know where you stand. Essentially you – dear reader - are Debian. To put another way, you can be as much a part of Debian as you would like; there are no barriers to entry and no requirements for use.

The same cannot be said of something like Ubuntu, Mark Shuttleworth’s distro based on Debian. Open and welcoming though Ubuntu may be, you are not Ubuntu. You are a user of Ubuntu.

It's a subtle distinction, perhaps, but it's also part of the contract: you know where you stand. And that applies to high-level philosophical ideals about free software as well as everyday stuff like release dates, which Debian doesn't have. Debian has rough targets, but Debian releases are released when they are deemed ready and not before, even if that means targets are missed and new software arrives later than intended (this is part of why Debian offers a rolling distro, for those who'd prefer not to wait).

There are downsides to Debian's approach. The openness that comes with Debian's contract means that internal disputes and developer differences can be very loud and very public. Sometimes the divisiveness spills out into the larger Debian community in unpleasant ways.

But, messy though it may sometimes be, the openness has nevertheless served Debian well and it has kept the whole thing rolling. Look at what happened when the Project’s organisers bought into Shuttleworth’s plan for a grand alignment between release schedules in 2009, and Deb devs got in a flap over being tied to Canonical’s roadmap.

Twenty years ago Murdock ended his manifesto with the warning that "the time has come to concentrate on the future of Linux rather than on the destructive goal of enriching oneself at the expense of the entire Linux community and its future". That warning feels just as relevant today, when the lure of app stores and all manner of tightly controlled development encroaches on Linux from all sides. ®