It's hard to believe, looking at the modern computing world, but there is still more to life than Windows or Unix… and today, most of the alternatives run on vanilla x86 hardware and are free.

Most of them need considerably lower resources than the market-leaders, too, so an old PC is ideal for trying them out. VMs are fine, but you can't get a real feel for an operating system until you've installed it on bare metal.

If you were around in the late 1990s, you might have heard of former Apple exec Jean-Louis Gassée's startup Be. Be Inc started out making its own hardware, then ported to Apple's Power Macintosh hardware, then to x86 and then, after a few final struggles, went under and was bought out.

You can still download the evaluation version of the final release, BeOS 5 Personal Edition, but it was built for tail-end-of-the-'90s hardware, so it's a bit dated today.

However, its spirit lives on in the form of Haiku, a from-scratch FOSS reimplementation which runs the original Tracker desktop and some of the handful of BeOS 5 apps. It's one of the most polished and modern-looking alternative OSes out there, too. 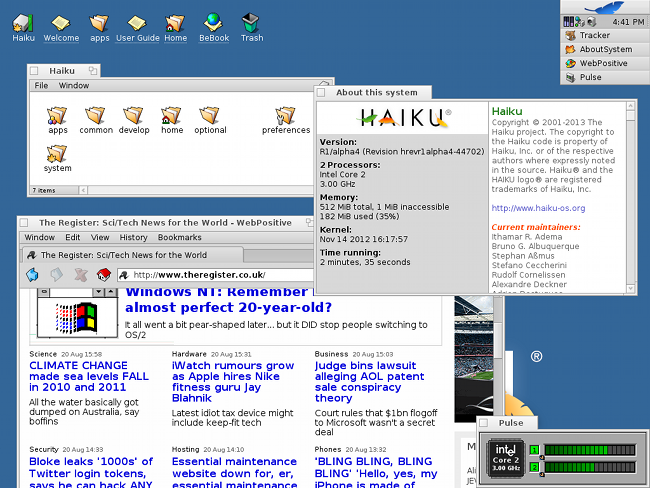 Haiku is well on its way to being a complete FOSS replacement of BeOS. (click to enlarge)

(If you miss BeOS but are content with Linux, there's also ZevenOS, an Xfce-based Ubuntu remix that manages to look uncannily like the real thing.) 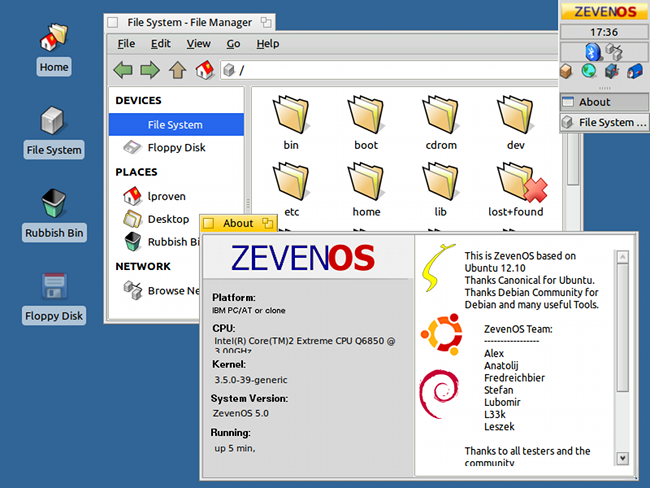 ZevenOS, meanwhile, is Ubuntu with Xfce, but skillfully re-skinned to offer the BeOS look and feel.

The BeBox was intended to be a geeks' machine, akin to the Amiga before it. AmigaOS itself lives on – there's a modern PowerPC version, a commercial clone and a FOSS reimplementation: AROS. It's API- but not binary-compatible, but it can emulate the old hardware, and even has an 68000 version for an all-FOSS install. If you're not an old Amiga hand with suitable software hanging around to try on it, there's also Icaros, a distribution with additional preloaded apps.

Another re-implementation of an existing system aims at something more contemporary: Windows. Yes, there's an open-source effort to recreate Windows NT: ReactOS. It's an interesting idea, but if it ever gets close to completion, I suspect that it will get sued into oblivion with remarkable swiftness.

Another interesting offering, from the turn of the century, is AtheOS – made even more remarkable by the fact that it was a one-man effort. Its creator, Kurt Skauen, has moved on to other things, but the FOSS community has since forked AtheOS to create Syllable. (There's a server product of the same name, too, but it's a Linux distro rather than the Syllable OS.) Although AtheOS started out as an AmigaOS-like system, Syllable doesn't remotely resemble anything Amiga-like any more.

Another ground-up project – albeit one which went closed-source – was Robert Szeleney's SkyOS, but sadly he halted development in 2009. The last beta version was made freely available this year though, if you can find it.

Sliding back in the direction of vaguely Unix-like OSes, we come to Plan 9 from Bell Labs. This is what the creators of Unix went on to do next. Plan 9 extends Unix's everything-is-a-file notion to include network transparency. It's Unix Version 2: a distributed, grid-oriented OS. Compared to modern Unix, it's also very minimal and lightweight. 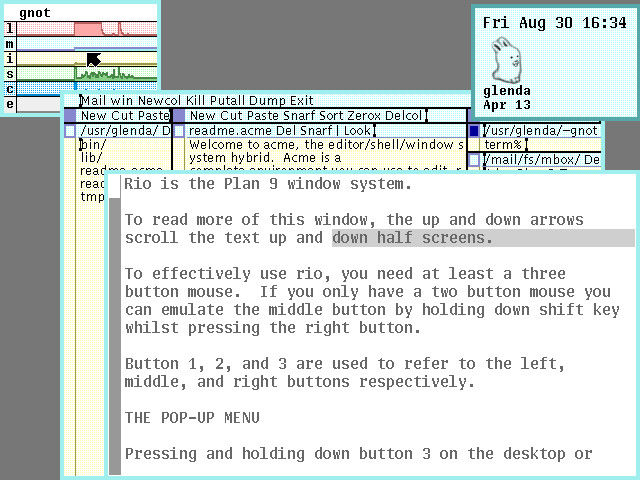 Plan 9 is... weird, and has almost no applications - but it shows a future direction for Unix-like OSes

Plan 9 itself has a successor, as well: Inferno. This also abstracts away the CPU architecture, using a VM ("Dis", comparable to the JVM but reaching right down into the OS's kernel) and a special type-safe portable programming language: Limbo. Inferno not only runs on native hardware but as a VM inside web browsers, thus bringing other operating systems into its grid.

And if minimal Unix-like OSes are your thing...

When Linus Torvalds originally announced his new Linux kernel on Usenet, he commented that it "won't be big and professional like gnu" – meaning the HURD, the GNU Project's ambitious Unix-compatible microkernel.

Well today Linux is very big and professional, whereas the HURD is still far from finished and probably never will be. However, if you'd like to experiment with an alternate future, one that never happened, there's a HURD-based Debian release.

Today, the most famous "microkernel" OS is Mac OS X, the core of which is itself FOSS in the form of Darwin. OS X cheats, though, by including the bulk of the FreeBSD kernel as a "Unix server" inside its not-very-micro-any-more Mach-based XNU kernel. But there are actual microkernel OSes out there. BlackBerry's QNX is one, but although there are freeware developer editions for the PC, it's not open source. 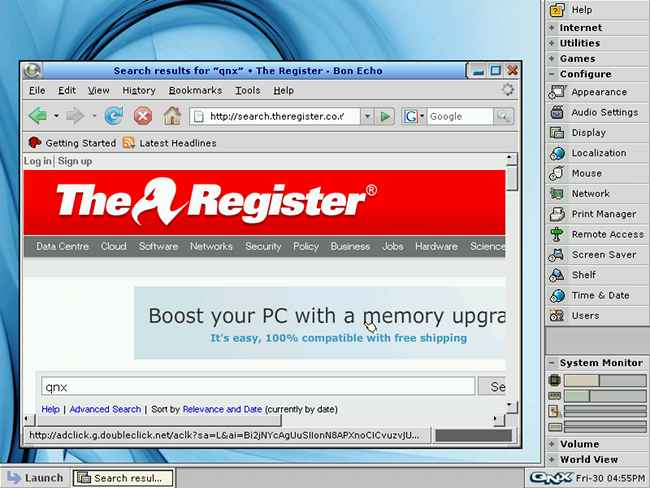 QNX's demo version comes complete with apps and an IDE.

It isn't the only option, though.

Back when Linux was first announced, there was a notorious discussion after a notable academic specialising in OS design, Dr Andrew Tanenbaum, decried the brand-new kernel as obsolete because it wasn't a microkernel. Linux itself had been bootstrapped using Minix, a very simple, portable, model OS designed by Prof Tanenbaum for teaching purposes. Eventually, to show that his theories were sound, the good professor rewrote Minix as a native x86-32 microkernel system. Minix 3 is very unlike the earlier versions and includes significant amounts of code from NetBSD to provide core Unix functionality. 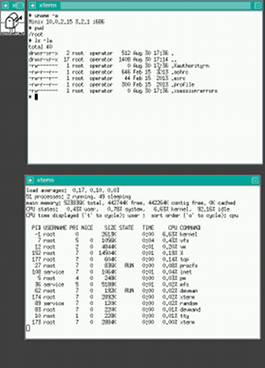 Unix all a bit too much? Hanker for simpler times, when mastery of the PC meant hand-tuning CONFIG.SYS and AUTOEXEC.BAT? Before Caldera went insane and ate its own children, it acquired and then open-sourced DR-DOS, the original alternative DOS for PCs – and although it later changed its mind, the code is still out there. There's also a ground-up rewrite, FreeDOS, which sports a choice of GUIs, including another Digital Research product that's now open source: the GEM Desktop.

If even DOS is too big, there are even some minimalist x86 OSes written in assembly language. Perhaps the most directly useful is VisOpSys, which is the basis of the Partition Logic disk management tool. Somewhat more versatile are MenuetOS and its fork KolibriOS.

Going off in the opposite direction is Squeak, a complete Smalltalk-based environment. Normally this runs under a host OS, but it qualifies here due to SqueakNOS – a project to run the Squeak environment directly on the PC hardware.

And perhaps even more way-out than Squeak were the Lisp Machines – some say the greatest ever programmer's environment. Well, if you can find a copy of OpenGenera, the last-ever Lisp Machine OS, then it's possible to run it under x86-64 Linux. Perhaps that might inspire you to help develop the core of a Lisp environment for x86, too.

Twenty-five different PC operating systems to play with that are quite unlike anything else, eighteen of them free and open source. Why go outside and risk skin cancer when there are so many toys to play with over the summer? ®