The latest from the software gift horse stables

Product round-up One saving grace of buying a shiny new Mac over a PC is certainly the lack of factory-installed bloatware. However, while Mac OS X is far from featureless, many users will find themselves headed straight to the Mac App Store or elsewhere to supplement their experience.

Since not everyone wants to wade through endless lists of games featuring ballistic birds or the latest teenage mutant messaging system, here’s a list of good wholesome freeware to fill the void that even brushed aluminium and retina displays cannot:

Spotlight was a noble attempt on Apple’s part to revamp app-launching with the release of OS X 10.4 Tiger, but nine years on, it’s a little behind the times. Enter Alfred, the virtual butler who’ll take care of just about anything you throw at “him”. 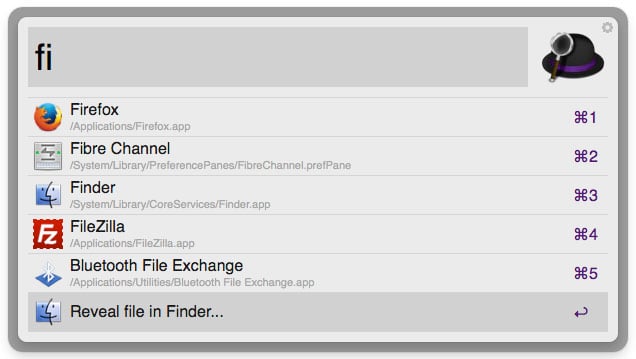 It’s not just an app launcher under that bowler hat either; Alfred will happily fetch URLs in your primary browser, search using any number of engines and social services, compute simple mathematics or pose complex questions to Wolfram|Alpha. Oh, and it can find things on your Mac too, if you still do any work locally.

For most people Adobe is more likely to be associated with exorbitant licence costs than open-source software, but the web technology giant has actually produced a few freely available gems. Brackets is one of these and while it is available on a number of platforms, the Mac version is the most polished.

Whether you just want a simple text editor with a bit more functionality than Apple’s offering or you live and breathe front-end web design, Brackets has got you covered. It’s highly customisable, recognises just about every syntax under the sun (or has a plugin available for it) and features really nifty live-preview integration with Chrome.

I very much begrudge paying for antivirus protection on a platform that is so minimally targeted by malicious code. While a Mac user may not be at such great risk as their Windows-using brethren, it is important to avoid becoming a carrier, especially if you exchange files with Windows users on a regular basis.

Don’t let the lack of fancy features like real-time protection put you off; installing ClamXav and setting up a regularly scheduled scan will help to keep you clear of any nasty things that do find their way on to your machine, no matter if they actually threaten you or not.

With DropBox and its veritable menagerie of cloud-storage brethren running rampant in an effort to take your data storage needs out of your own hands, it’s nice to come across an unpretentious cloud service that aims to enhance desktop productivity, rather than wrench the user out of familiar territory. CloudApp is all about sharing and sharing only what you need to, with those who need to see it. 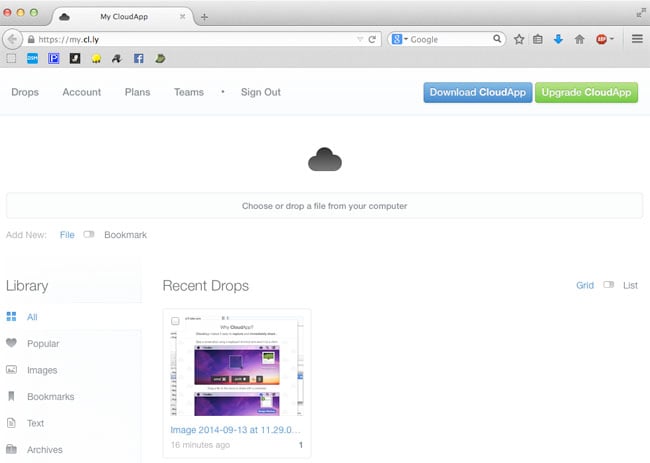 This little unobtrusive inhabitant of the Menu Bar allows quick and easy sharing of images, audio, video and text files, including formatted code. Integration with Finder, Photoshop & Tweetbot comes as standard, but files can also be shared by sending a “cl.ly” link which is automatically generated. It’s straightforward to use and your files can be accessed away from home simply by logging into htpp://my.cl.ly. Free accounts are obviously limited, but for sharing the odd tidbit here and there, it’s more than enough.

For those that aren’t such fans of Apple’s TimeMachine, or feel the need for the ability to make offsite backups, CrashPlan offers an array of options for the data integrity conscious user. While a subscription is necessary to backup to CrashPlan’s own cloud service, users are offered a couple of novel alternatives at no cost. 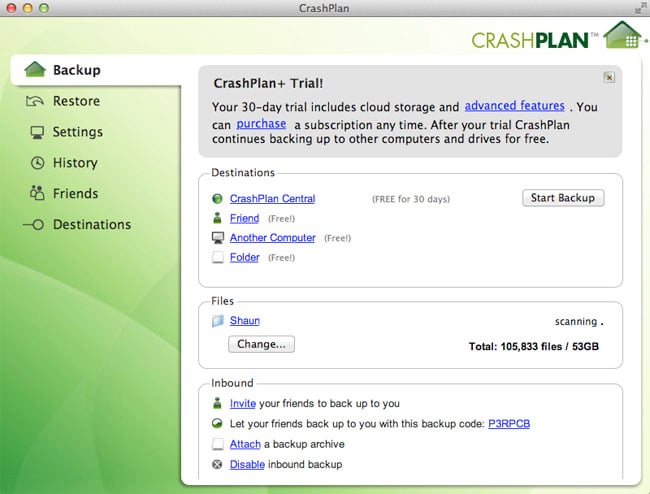 The simplest option is to back up to another computer that you own, simply by installing CrashPlan on both and signing into your account, provided both machines are on. Unfortunately the other option relies on two rather large social hurdles: having friends and trusting them with your data. If you happen to be socially well adjusted, then just add your friends who also use CrashPlan and off it goes!

f.lux is unique amongst the apps in this list, at least in the sense that it does not attempt to assist you in staying a slave to the keyboard 24/7, though it should in theory help with productivity. The premise behind Michael and Lorna Herf’s creation is that by adjusting the colour temperature of your display throughout the day, melatonin levels will not be artificially influenced, thus preventing disturbances within the natural circadian rhythm. 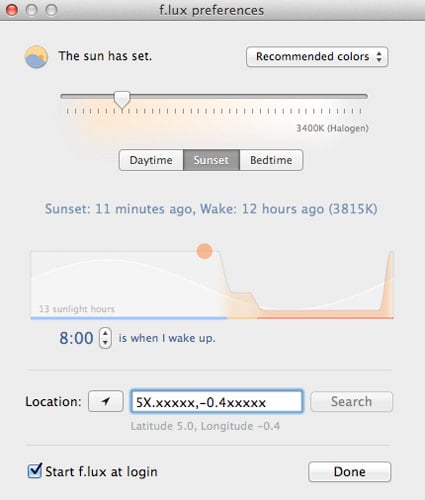 It’s not scientifically verified, but if you give f.lux your latitude, it will adjust the warmth of the screen accordingly and at the very least it appears to be less straining on the eye when working late. Unfortunately, if you live north of Iceland or are posted to the Antarctic it won’t work, but this is probably the least of your concerns. Give it a try and see if it works for you.

As I discovered when writing this article, the light sensor in my MacBook Pro is possibly the most frustrating feature ever to have been devised by Apple. It’s a brilliant idea if you are blessed with the god-like ability to control the lighting in every possible workspace, but if, like me, you are not the omnipotent overlord of electromagnetic radiation, then you might find Lab Tick useful. 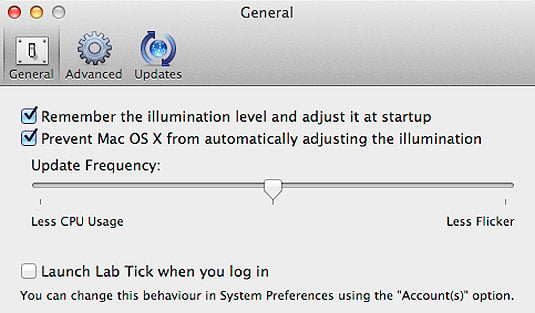 The ability to disable the light sensor’s influence over the screen brightness is already built into OSX, but the keyboard backlight is a rogue faction on a mission to stage a coup d'etat and overthrow your productivity by delivering subliminal Morse Code messages through its constant dimming and brightening. Lab Tick takes care of this by giving control back to you, the people user, allowing you to manually set the brightness and assign keyboard shortcuts for its control.

Microsoft Office is the bane of a Mac users existence (PC users too, really) and frankly I’ve never been a fan of Apple’s iWork suite due to its total lack of cross-compatibility with anything. For these reasons alone, you don’t have to be budget conscious to justify using a free alternatives such as LibreOffice. 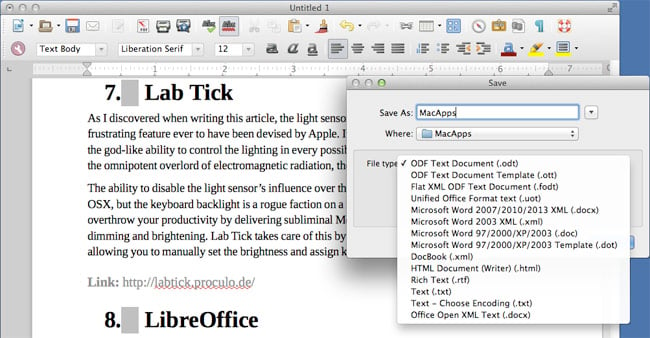 Not only does LibreOffice offer a rich and full-featured productivity suite covering everything from word processing, spreadsheets, presentations, vector graphics and database management, but it does so with almost perfect compatibility with Microsoft Office. As such, you can now rid yourself of Microsoft’s shackles and still work collaboratively with the rest of the unenlightened world.

If you’re sick of all the praise that VLC gets or you happen to have that one niche case that it just can’t handle, give MPlayerX a try. It’s built, as the name suggests, on the much lauded MPlayer engine, which combined with FFmpeg can handle just about anything.

The interface is just about as minimalist as you can get, but there’s a whole lot under the surface, like the excellent multitouch integration, so the lack of buttons is far from an inconvenience. Throw in the intelligent playlist generation, and raw DTS/AC3 streaming via S/PDIF passthrough and it’s quite the seamless media experience. ®

Outstandingly limited is probably the best way to describe Apple’s built-in Archive Utility, an application that turns its nose up at password protected ZIP files and sports a feature set that is shorter than the list of promises a politician will actually keep. 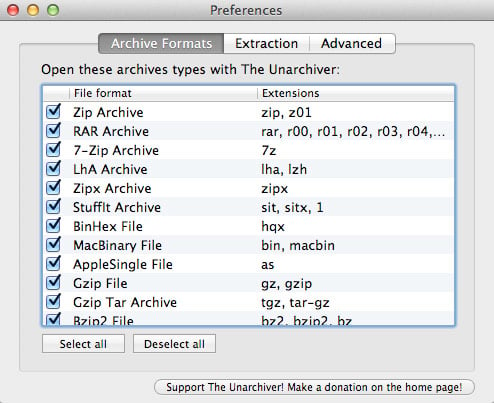 In the past ridding oneself of this blight required the use of Stuffit Expander which itself hasn’t aged too well either, however, the savvy user can now enjoy the delights of hassle-free decompression with The Unarchiver. It’s open source and can handle just about anything you throw at it (including RAR and Stuffit formats) – what’s not to like?