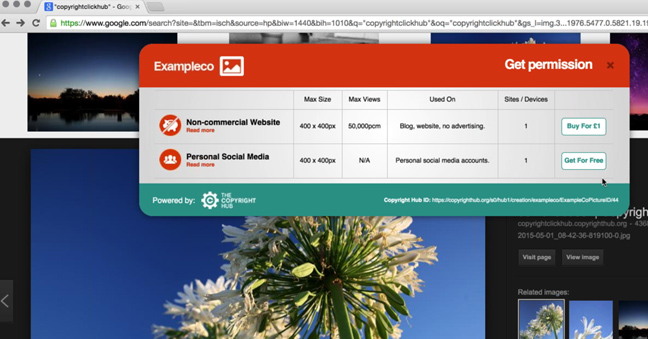 The Hub is backed with enthusiastic responses from Acorn founder Herman Hauser and (less surprisingly) creative industry grandees including Peter Bazalgette and David Puttnam. And it’s also gathered some global interest, as Australia has chipped in AU$50,000.

Young says the code will be open sourced with the idea that people can run with it.

"Anyone can take protocols and set up their own hub and marketplace. There’s no single anointed place where everything is centralised and controlled from. You can start a Creative Commons Hub or a USA Hub," he explains.

The standards could rapidly find their way into your smartphone and cameras, so anything shared is automatically embedded with machine-findable ownership information. Today, stripping this metadata from images is actually a criminal offence under UK copyright law – but that doesn’t stop large media and technology corporations from doing it on an industrial scale.

If individuals became aware of their rights and asserted them, perhaps they’d stop pretty quickly.

How the Hub got here

Attaching property rights to digital stuff isn’t a new idea. The Linked Content Coalition has been beavering away at standards for years and the Hub builds on their work, as well as industry identifiers, where possible.

The idea was included in the Hargreaves review of copyright in 2011 after photographers had shown ministers a demo of image identification in practice, arguing that modern image recognition technology means there should be no unidentifiable images floating around on the internet. We wrote about it at the time here. Getty’s PicScout, part of the 2010 demos, was present at the Hub launch today.

Richard Hooper, the former Ofcom deputy and chair of the Broadband Stakeholder Group, who has shepherded the Hub to reality, said the culture sector would be one of the first to benefit. If successful, it’s likely to make licensing of very low-cost items easy, but it isn’t really the place where billion-dollar deals like football rights will get processed.

The Hub faces several challenges. One is that it needs the co-operation of vast technology companies who who have built fabulous fortunes on the absence of property rights. Silicon Valley’s pervasive propaganda has been very effective in convincing people to act against their own economic interests and not use their rights, or even campaign to weaken them.

For example, the “manifesto of internet rights” commissioned by the Italian Parliament this week lists 14 rights – but as commenters point out, the right you already have, to ownership of your own stuff, isn’t one of them.

A recent manifesto of "internet rights" has a gaping hole in it.

But it’s not inconceivable that Facebook and Google could get benefit from an explosion of properly-functioning marketplaces – and users can vote with their feet. Imagine if a Facebook rival emerged that didn’t require users to surrender their rights, and that rewarded them for their creativity with real dosh. Who’d want to stick around with the old Facebook that doesn’t do either? ®