The Hitch-Hiker's Guide to the Galaxy - the real one, not that Douglas Adams novel thingy - just came a step closer. Sony has launched its first electronic book using what it calls "electronic paper".

In reality, that means a high pixel density display panel. Unlike most 72dpi notebook and monitor panels, the 6in one used in the Sony Librié 1000-EP is a 170dpi job. The display's resolution is 600×800. The technology comes to Sony from Philips - the e-book uses Philips' Electronic Paper Display, which is itself based on E-Ink technology. 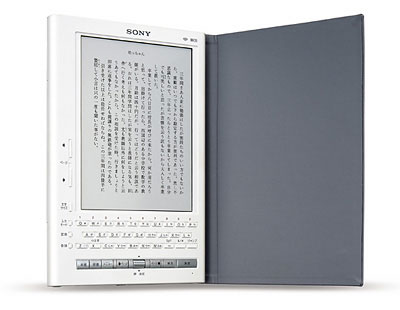 E-Ink's system uses charged black and white particles. Under the influence of an electric field, the particles adhere to the panel, allowing them to stay there when the current is removed. Power is only needed to change the image, not to maintain it, making the technology suitable for very low power applications. And the image is retained even when the display's power is cut.

The Philips display is capable of creating four-level greyscale images, presumably by varying the density of particles in a given area, much in the way photos are reproduced in print.

The Librié 1000-EP contains 10MB of memory and includes a Memory Stick Pro slot for extra storage. You get about 500 books on a 512MB Memory Stick, says Sony. But they are likely to be copy-protected - the machine incorporates Sony's Open Magic Gate (OpenMG) DRM system.

The unit weighs 190g and measures 12.6×19×1.3cm. In that space, Sony has crammed in a USB 2.0 port, Qwerty keypad, speaker and earphone socket (the Librié has a voice recording facility).

Science Fiction author Arthur C Clarke once said that electronics would only truly replace paper when manufacturers got the price down to the level of a standard paper back. Judging by the Librié, they're still a long way off: it will cost ¥40,000 ($376) when it ships on 24 April. Content will be available on an 'all you can read' basis for ¥210 ($1.98) a month subscription. ®