Japanese do u-turn over naked Britney 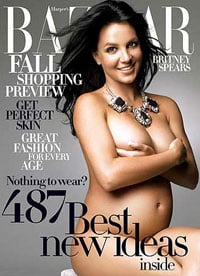 Officials from the Tokyo subway system have reversed an earlier decision not to display a "overly stimulating" poster of highly-talented and highly-pregnant US chanteuse Britney Spears in her birthday suit on the cover of Harper's Bazaar.

The powers that be originally ordered the image, which graced the cover of the magazine's US August issue, to be blacked out below Britney's waist, thereby allowing a tantalising glimpse of her pre-maternity mams but obscuring the swelling in which her and Kevin Federline's second sprog is currently wallowing in a-list amniotic fluid awaiting an autumn release.

The censored area would have contained the statement: "We apologise for hiding part of a beautiful image of a mother-to-be."

Tokyo commuters will, however, now be exposed to the full Spears, the BBC confirms. Tokyo subway spokesman Tatsuya Edakubo explained: "Our earlier request to cover the photo from the waist down was because of nudity, not because we had anything against pregnant women." ®

To BALDLY GO where few have gone before: NASA 'naut twin to spend YEAR IN SPAACE

Pic + vid Study will pave the way for mission to Mars

Are you sure you want to outsource IT? Yes/No. Check this box to accept Ts&Cs

Er, and you might wish to READ them too

Analysis Unless you work for UK.gov

And you can't flog your kidney on eBay

Why are opera singers fat?