An anti-poverty campaign has reminded the inhabitants of Second Life that while they fanny about wasting time and money hiding from their own trivial worries there are people are dying unnecessarily in the real world.

The World Development Movement (WDM) has loaded a digital counter into Linden Labs' virtual world which tallies the number of preventable child deaths since it was first opened in 2003. A child's life is lost every three seconds. 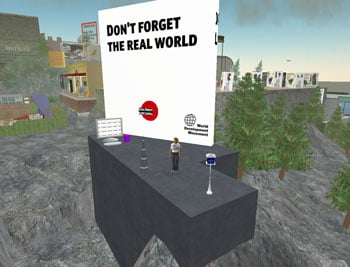 The wake-up call comes on the same day a chilling survey reveals almost half of Americans who use "virtual communities" believe events there to be just as significant as those in the real world.

The WDM's Peter Taylor said: "Millions of people are now spending more and more of their time in Second Life or similar virtual environments. We are here to remind them that they can't escape the problems of the real world."

The WDM was a founding force in the Fairtrade Foundation, the Jubilee 2000 campaign to cancel debt, and Make Poverty History. The charity is encouraging the more than one and a half million Second Life "residents" to remember reality and participate in it. ®

Founder of firm at center of fraud claims he's 'not running' right now. Ditched the Fitbit, have you?
Personal Tech26 Sep 2022 | 3