A Chilean prostitute has caused a bit of a stir by selling 27 hours of rumpy-pumpy in aid of tomorrow's annual TV Teletón campaign for the country's disabled kids. 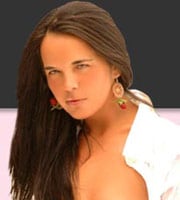 According to the Santiago Times, big-hearted hooker María Carolina (seen right) said: “I will work during the time that the program lasts in order to earn money for the children of the Teletón, and then deposit it in the bank. They will be my own 27 hours of love.”

The show's presenter, Mario Kreutzberger, admitted the charitable shagfest was "outside my moral boundaries", but, since prostitution is legal in Chile, the organisers apparently have no qualms about accepting the cash.

And it could be a nice earner, too. María Carolina told Reuters yesterday she'd quickly raised $4,000, explaining: "One of my clients already paid. It seemed like a good deed to him."

Las Últimas Noticias has a pic of María Carolina and more (in Spanish) on the sexathon here. ®

María Carolina does have her own website - http://www.mariacarolina.cl - but her new-found celebrity seems to have screwed the servers somewhat.