Niche titles given life through HP

Sony Pictures Home Entertainment is to use HP's DVD manufacturing-on-demand service to release DVDs that would otherwise not see the light of day.

Customers will be able to order certain Sony DVDs through retailers, who can in turn order only the quantity they need rather than bulk purchasing ahead of time, as is the usual way. Sony says it can release more relatively obscure media, without requiring retailers to make a larger investment in niche titles with limited demand.

The companies haven't finalized a list of titles yet, but classic TV shows, foreign and independent movies, sporting events, and a potpourri of specialty programming such as religion, food, health and educational programming are the likely candidates. Pricing will be left up to individual retailers who use the service, Sony said.

Best of all, the pact may prevent some soul-wrenching moments at your local movie hawker. Doctor says drawing makes the hurt go away: 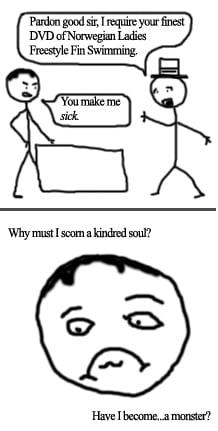 Sony is HP's first major Hollywood player to sign up for its year-old made to order disk pressing service. To date HP has signed with about 30 other smaller content providers for its Video Merchant Services program.