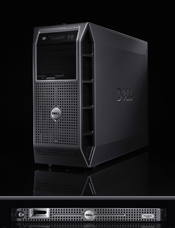 Both the new PowerEdge R300 rack server and T300 tower can be fitted with a quad-core Xeon x5460 processor running at 3.16 GHz. The chip is more typically found nesting in multi-socket servers.

For memory-intensive applications, the systems offer 24GB of RAM — three times the capacity of typical one-socket systems, according to Dell. They also sport some high-availability features such as hot-plug hard drives and redundant power supplies.

Security features in the boxes include a Trusted Platform Module (TPM) for encryption, internal lock-down on USB, and locking bezels to help prevent hard drive burglary.