Lights on, no one home

Updated A vulnerability in the website of the UK Parliament appears to be exposing confidential information, including unencrypted login credentials, a Romanian hacker wrote on his blog.

The SQL injection vulnerability is on this page, the hacker, who goes by the moniker Unu, told The Register. By tacking database commands onto the end of the web address, it's possible to trick the site's backend server into coughing up data that was never intended to be published.

Based on a screen shot below, which was included on Unu's post, it appears Parliament's website has been coerced into divulging log-in credentials for at least eight accounts. The disclosure is troubling for several reasons.

First, there's the SQL injection hole itself. In the past, we've compared such attacks to Jedi mind tricks, in which weak willed websites are turned against themselves with the web-equivalent of a wave of a hand and a discreetly made suggestion. There's also the likelihood that the passwords, because they're being displayed in readable form, are being stored without the use of encryption. Keeping passwords in the clear is a big no-no in the world of security.

Finally, there are the passwords themselves. Because we don't want to give away potentially valid passwords, we won't say what they are. Suffice it to say most are trivial to guess. One of the few exceptions was a password that was the name of a popular super hero, never an acceptable access code.

That belonged to a user named "fulera." Softpedia speculates it belongs to one Alex Fuller, who according to a LinkedIn profile page, is currently employed as a senior web producer for the UK Parliament.

Of course, there's no way to know for sure how serious the leakage of such information is. It's possible the credentials were used for accounts that were discontinued weeks or months ago. A Parliament media officer contacted Tuesday said he'd have to look in to the matter and get back to us the following day. 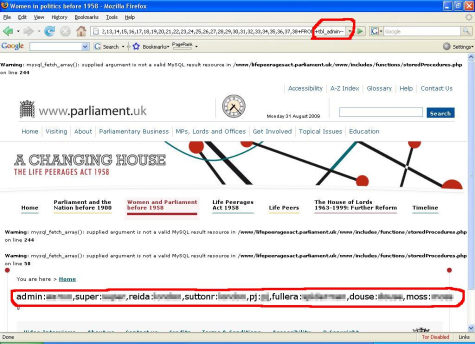 How a Jedi mind trick can fell Parliament (click to enlarge)

But either way, the website reflects poorly on Parliament. As federal prosecutors in the US revealed two weeks ago, hackers carrying out the largest credit card heist ever prosecuted got a toehold into supposedly secure systems by exploiting similar SQL injection vulnerabilities.

What's more, Unu said he's left two advisory messages since Sunday and the Softpedia article also says the webmaster has been notified. Counting The Register's call on Tuesday, that's at least four warnings over 48 hours. And yet the hole was wide open as recently as Tuesday evening.

This article will be updated if the vulnerability is fixed. Until then, you may want to steer clear of the site altogether. ®

A few hours after this article was published, the vulnerable page was taken down. "I can confirm that the information has been passed to our site developers who are working on a solution as a matter of urgency," the Parliament media officer wrote in an email to The Reg.

Appian awarded over $2b after claiming Pegasystems stole its data