Orange rolls into the banking business

Not quite pay-by-phone, not yet

Orange is the latest mobile operator to get into the banking business, launching a co-branded Barclaycard with a wireless slant.

The two companies announced they would be working on a wireless payment system back in March last year, and it seemed that payments by mobile phone would be the obvious result. But apparently the world isn't ready for that so for the moment it's just a Barclaycard with an Orange logo in the corner. 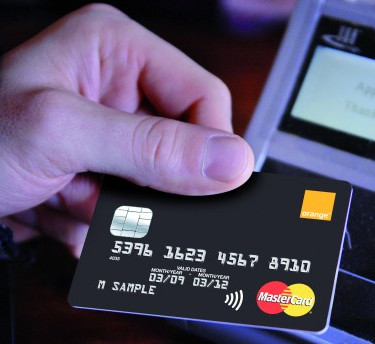 Nope, it's not a phone, but it has got an Orange logo on it

The card does use Near Field Communications (NFC) to facilitate wireless payments, which would be more impressive if it wasn't common to all cards issued by Barclaycard these days. So basically it's a credit card with SMS notifications when it's being used.

So not quite a mobile phone you can use to pay for stuff, though Marc Overton, speaking on behalf of Orange, described the product as "the next exciting step in the journey to the future world of consumers paying for everyday goods on their mobile phone". Meanwhile a canned statement from the MD of Barclaycard claims "Barclaycard is starting to make mobile contactless payments a step closer for UK consumers" - so it might look like a normal plastic card to you and I, but that's the future that is. ®