What Intel's 'Nehalem-EX' is really good for

Maybe what Intel really needs to do with its future Xeon processors is stop jacking up the core count so high and start putting more memory controllers on the chips and more memory channels in each socket. Maybe Intel should get back into the memory business.

When server maker Dell launched its two-socket and four-socket PowerEdge machines using the just-announced "Nehalem-EX" Xeon 7500 processors, it spent more time talking about memory than it did processing. Just like IBM's System x and BladeCenter machines using the Xeon 7500s, Dell's new high-end PowerEdge boxes aim to give X64 server customers a lot more memory to play with than the two-socket boxes using the Xeon 5500 (from March 2009) and 5600 processors (launched in mid-March), which top out at 18 DDR3 memory slots or 144 GB using 8 GB memory sticks. In a modern virtualized server world, that is just not enough memory.

So with the Xeon 7500s, server makers are all trying to cram as much memory as possible into their machines, and Dell is no exception with its PowerEdge line. Dell has two four-socket rack servers, a four-socket blade server, and a two-socket box with the memory slots of a four-socket machine for those who need to double up on memory per socket.

The PowerEdge M910 is the blade server, and unlike many of its siblings, it is a full-height blade that spans the 10U enclosure from bottom to top. The M910 is, however, a single-wide. Dell has not taken the modular blade approach like IBM has with its BladeCenter HX5, which allows two two-socket blades to be snapped together to make a four-way and which also has two option Max5 memory expansion cards that allows a two-way to host 320 GB of memory and a four-way to have 640 GB using 8 GB DIMMs. The PowerEdge M910 from Dell is a more straightforward blade that has four sockets and 32 memory slots, for a maximum of 512 GB of capacity using 16 GB DIMMs.

Dell's is a more brute force approach, and without knowing what IBM is charging for the Max5 cards, it is hard to say which is cheaper. But the odds favor 8 GB memory sticks for a given capacity to be a lot cheaper than 16 GB sticks. And Brian Payne, senior manager for server product planning at Dell, says that IBM's memory scalability with the eX5 machines is "overkill" and "sacrifices density" and that the Dell approach uses traditional form factors without any snap-ons. The memory expansion features for rack servers in the IBM Nehalem-EX machines, as El Reg previously explained, are 1U boxes that plug into the eX5 chipset and stack on top of the rack servers.

The M910 blade is based on Intel's 7500 chipset, formerly known as "Boxboro," and it can support the full spectrum of eight Xeon 7500s (from the four core up to the eight core variants) and the three HPC-tweaked Xeon 6500 models, which are only supposed to be available for two socket boxes according to Intel but that is what the Dell spec sheet says. If you use the Xeon 6500s, you can only put two in the box. 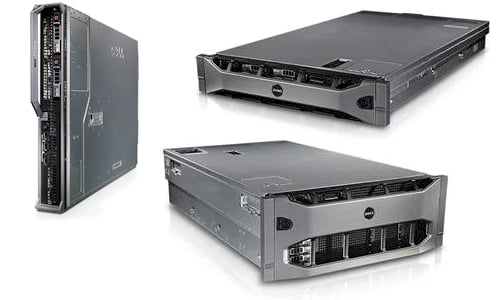 The M910 has two Gigabit Ethernet ports with TCP/IP and iSCSI offload engines, a RAID controller, and room for two hot-swap 2.5-inch disks or solid state drives in either SATA or SAS flavors. The Dell Xeon 7500 blade has a variety of mezzanine cards for adding 10 Gigabit Ethernet, InfiniBand, and Fibre Channel links. On the software front, the M910 supports Microsoft's Windows Server 2008 (including the HPC variant), Red Hat's Enterprise Linux 5.5, Novell's SUSE Linux Enterprise Server 11, and Oracle's Solaris 10. Microsoft's Hyper-V and VMware's ESXi and ESX Server 4.0 hypervisors are certified on the M910 blade too.