RHEL 6: how much for your package?

You know how you can tell that Red Hat Enterprise Linux 6 is a real enterprise-class operating system? No, it's not because the word "enterprise" is in its name. What makes RHEL 6 an enterprise OS is that it now has so many features and add ons - and prices for each - that it is no longer easy to describe it in one sentence. But this one will work in a pinch: RHEL 6 costs more than RHEL 5.

The packaging for RHEL 6 is similar to that used with RHEL 5 when it was launched in March 2007. The client versions of RHEL 6 are fairly simple. If you want to use the basic desktop, it costs you $49 a year to get a support contract, which is absolutely competitive with Windows and other Linuxes in terms of pricing.

This RHEL 6 Desktop includes all the tools a modern office worker needs: the Firefox browser; the OpenOffice 3 suite for word processing, spreadsheets, and such; the Evolution/Thunderbird email clients, and the Planner/TaskJuggler calendars. If you are an application developer, then you probably want RHEL 6 Workstation, which costs $179 per year for a standard (9x5) business support contract and $299 per year for a 24x7 contract. If you pay for three years of support from the get-go, Red Hat chops around 5 per cent off the price, as you can see in the table below: 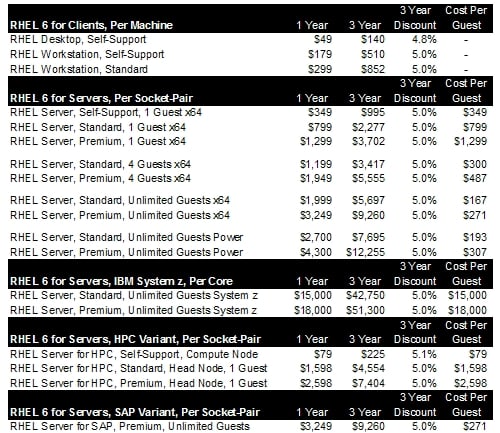 Support subscription pricing has gotten more complicated with RHEL 6. RHEL 5 had a base server with four virtualized operating system guests included in the price and then a step up to the Advanced Platform with unlimited guests for a lot more dough - and including a lot more software functionality. Now, you have to pay a premium to go virtual at all, and if you want to go virtual with unlimited virtual machines, you have to pay a lot more money.

As you can see from the table above, the foundation RHEL 6 entry server carries the same price as the RHEL 5 entry product did: $349 for a basic, self-supporting annual subscription contract, $799 for a standard 9x5 business contract, and $1,299 for a 24x7 premium contract. As was the case with RHEL 5, this entry server license covers a machine with two processor sockets. It is not licensed per machine, like Novell does with its SUSE Linux Enterprise Server.

With RHEL 5, this entry server included the use of up to four virtual machine guests, but with RHEL 6, you only get to have one OS image (what Red Hat calls one guest) on the box. Now, with RHEL 6, if you want to start using the embedded KVM or Xen hypervisor to slice up the server, you have to pay more money than you did with RHEL 5. But even as you pay more, the cost per VM goes down. (In the table, I am using a two-socket Xeon 5600 server as a baseline, and I also assume that the customer wants one VM per physical core, which is common in data centers these days).

It is important to realize that these RHEL 6 support subscriptions are sold in two-socket chunks, while the RHEL 5 Advanced Platform licenses were sold for an entire physical machine and had an unlimited amount of virtualization. RHEL 5 Advanced Platform cost $1,499 per machine for a standard license and $2,499 per machine for a premium license. Advanced Platform also included Red Hat's Cluster Suite and GFS file system, which are not included in the heavier configurations of RHEL 6. They're carved out separately as add-ons that carry their own fees for support.