New Year's Eve is party night – and who better to spend that celebratory evening with than your constant companion, one that has served you well throughout the year?

No, we don't mean your spouse or significant other. We're talking about your iPhone, iPad, or iPod touch.

Before you accuse us of kinkiness or fanboi device-worship, let us explain that we're talking about using your Appleonian iOS device to spice up an evening that you'll spend with actual humans, not as a companion with which to while away the waning hours of 2010 all by your lonesome.

We've rounded up a dime bag of apps that might help make your New Year's Eve party a night to remember – or forget, if things go especially well. Not all of these apps are for everyone, but one or two might be of interest or value to the discriminating party planner.

And so here's a brief foray into the App Store's party pantry, beginning with:

Oral gratification is one of mankind's most satisfying pursuits, and the App Store has a number of suggestions about how to prepare and present some fine party cuisine and inhibition-loosening potations

Party Tricks: The Ultimate Entertaining Guide (iPad, $1.99) stands out among the hundreds of recipe apps crowding the App Store in that it groups its offerings into party-specific themes.

Produced by the publishers of 2: The Magazine for Couples, Party Tricks includes a raft of well thought-through recipes in eight different party scenarios, from the simple to the complex.

It also offers general party-planning tips in a section entitled Party Primer, plus wine-pairing and bartending advice for the advanced gourmand. Be forewarned, however, that brand-specific promotions abound. Ignore them if you'd like, and the recipes will work just as well. 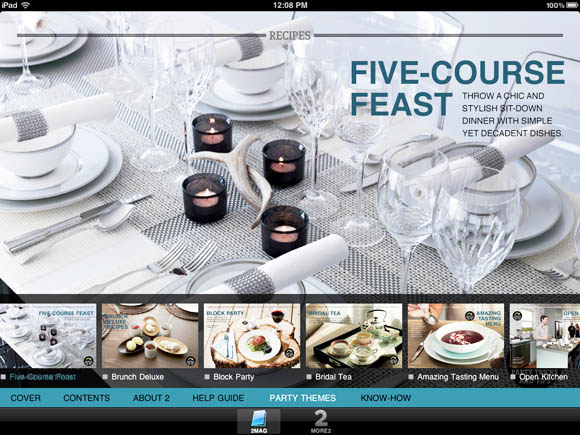 Party Tricks' magazine roots are evident in its fine photography

Teetotalers can skip to the next page in this round-up – we're now talking booze.

Steve Jobs' puritanical streak may have banished even the mildest forms of fleshy titillation from the App Store, but it hasn't caused him to banish hooch. A search for "cocktail", for example, turns up over 300 apps for the iPhone and iPod touch.

Among the spiritual apps that caught our eye were Cocktails - Top Shelf (iPad, $2.99), with its fine photgraphy and inventive concotions.

We can also recommend Drinkspiration (iPad, free). Even though this app is sponsored by Absolute Vodka – and, of course, focuses on drinks made with that nose-in-the-air sauce – it's well put-together and has an entertainingly illustrated search function. The price is right, as well.

Our favorite bartender's friend, however, is iVideococktails : 60 cocktails in video (iPad, $3.99). As its title suggests, iVideococktails leads you through each recipe with an instructional video. It may be a wee bit on the pretentious side, but the information is clear and there are plenty of navigational choices. 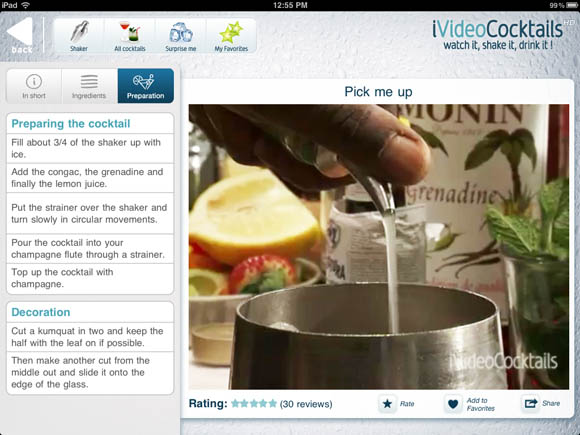 If you don't feel like sitting through the instructional videos, you can also simply view the recipes and follow a few "In Short" tips to assemble your creations. Or just drink straight from the bottle. It's your liver.