The Home Office has announced the rollout of a new online crime-map service for England and Wales that ministers describe as "more comprehensive than any other scheme" in the world. The new mapping service offers crimes arranged by street, rather than merely by ward or subdistrict as before. 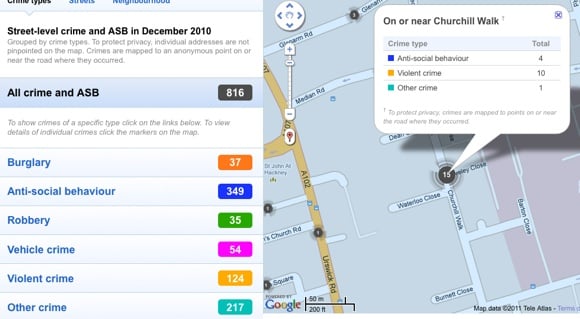 Watch your step along there.

The online portal, available from midnight Monday 31 January at www.police.uk, allows users to access a local crime map (provided via Google Maps mashup) by simply typing in an address or postcode. The exact locations where crimes have occurred aren't given: rather the number of crimes occurring "on or near" given streets are shown, broken down into sections in the case of long streets.

In addition to the crime map, the portal offers details of the local police Safer Neighbourhoods Team, nowadays intended by the Home Office to be local residents' first point of contact with the cops, and of meetings and briefings they will be holding in the area. (SNTs are headed by a police officer, but a majority of the personnel are Police Community Support Officers, PCSOs – uniformed patrol personnel without powers of arrest).

Reports shown on the map are broken down into six categories: violent crimes, burglary, robberies (ie muggings), vehicle crimes and "other" crimes, as well as reported cases of antisocial behaviour.

I have been an advocate of street-level crime mapping since seeing it work in Los Angeles so I am excited to see this website launched today, particularly as I believe it goes further and is more comprehensive than any other scheme. Police.uk will make England and Wales world leaders in this field, with every citizen able to access details about crimes on their streets.

Together with the introduction of directly elected Police and Crime Commissioners, we are giving people the information and power to hold their local forces to account and ensure that crime in their neighbourhood is driven down.

Crime mapping can be an effective means of letting people know what crimes are taking place in their local area although care needs to be taken as this can potentially have an impact on the privacy of individuals such as victims or witnesses.

We are pleased to have had the opportunity to provide advice about the privacy implications and that our advice has been incorporated into many of the safeguards that have been put in place. It will be important that this initiative is reviewed to ensure that the privacy safeguards are effective in practice.

A preview site was made available to journalists prior to the main site going live, and appeared to work as advertised (see screengrab above). ®