British mobile phone resellers are in turmoil after being repeatedly targeted by thugs during the past four days of rioting that began in London before spreading to other cities. Unsurprisingly those businesses are urging extreme caution among frontline staff.

Carphone Warehouse, the country's largest independent handset retailer, told its employees in an internal memo, penned by Best Buy Europe's CEO Andrew Harrison and seen by The Register, that its exec team was "visiting stores and supporting colleagues".

He added that the firm was working hard to keep the business running during the events that unfolded over the past few days, which Harrison had watched "with a mixture of dismay and disbelief".

The Best Buy boss said that the "safety and wellbeing" of Carphone Warehouse workers was his top priority.

"This is followed by safeguarding our company assets, securing our ability to trade and looking after our customers." 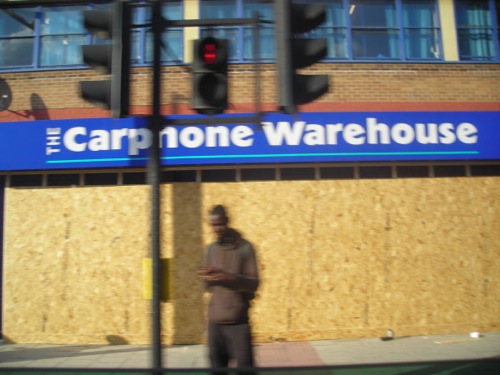 Carphone Warehouse sold a 50 per cent stake in its mobile phone retail biz to US electronics retailer Best Buy in 2008, when the UK-based company pocketed £1.1bn.

But in June this year Best Buy admitted that a slowdown in consumer spending had hampered its expansion plans in the UK, with the launch of 80 new megastores being put on the back burner.

It was reported that those ambitions had been scaled down to the creation of smaller outlets in the UK. However the riots may have put a dent in those plans.

Harrison did remind staff that Carphone Warehouse and Best Buy were listed on the UK's National Property Register, dubbed Immobilise.

"The service has over 25 million members and was set up in 2003 with the help of The Carphone Warehouse, the police and other industry members to combat mobile phone theft," he noted.

"Immobilise enables us to block or track the usage of any stolen handset and we are working closely with the police with their enquiries.

"It’s in testing times like this that teamwork and support are critical, so please remain vigilant and stay away from any trouble. I’d like to thank you for your efforts as we get our business back to normal."

Phones4u is similarly putting the safety of its staff first. It gave us this statement:

"We can confirm that a small number of our stores have been impacted by the recent events. We continue to review the situation across those areas being affected and will close stores where we feel it is necessary to ensure the safety of our people and our customers, which is our priority.

"Our focus remains solely on protecting our staff and we will be taking any action necessary to ensure they remain safe as these unfortunate events continue to unfold."

The company was unable to confirm to El Reg at time of writing whether its handsets were listed on the National Property Register.

Phones4u said: "The UK's National Property Register, Immobilise, is a consumer initiative that Phones 4u fully supports. We use Immobilise for the storage and recording of stolen handsets, alongside a number of other policies and procedures that we use to investigate stolen mobile devices."

Phones4u is a member of the Mobile Industry Crime Action Forum, which was set up to fight mobile phone theft in the UK. The industry group endorses the Immobilise register.

The Metropolitan police said this morning that Commander Steve Rodhouse would be chairing a meeting attended by representatives from various industry groups including the CBI and Business Retail Consortium and hosted by the Department for Business, Innovation and Skills, to be held this afternoon.

They will discuss measures that have been implemented to deal with the looting of businesses in London over the course of the past few days.

The capital, which has had its police presence increased to about 16,000, saw little violence last night. In contrast, cities including Manchester and Birmingham were subjected to looting, thuggery and arson a spate of what appeared to be copy-cat rioting yesterday.

"The police are already authorised to use baton rounds and we agreed at COBRA [Cabinet Office Briefing Room A] that while they’re not currently needed, we now have in place contingency plans for water cannon to be available at 24 hours’ notice," said Prime Minister David Cameron this morning. ®