Finally, some skeptics have questioned the accuracy of the data used in earlier studies – notably Anthony Watts of Watts Up With That?, a leading climate-skeptic blog.

Watts argues that poorly performing temperature sensors in the US have skewed climate analysis, but the BEST analysis concludes that although readings from the stations Watts identifies as "poor" may be both higher and less accurate, the overall global warming trend is the same.

Watts has some strong criticisms of the BEST report – which, of course, is as it should be: science is enriched by objective debate. Equally true, however, is that it's crippled by arguments that seek to merely prove a pre-decided point rather than be informed by observeable data.

To help in that debate, the BEST team is sharing both its 1.6 billion temperature data points and the code used to analyze them.

Project cofounder Richard Muller is a fervent believer in data sharing and peer review – and an equally fervent critic of how journals such as Science and Nature stifle broad-ranging peer analysis, debate, and collaboration. 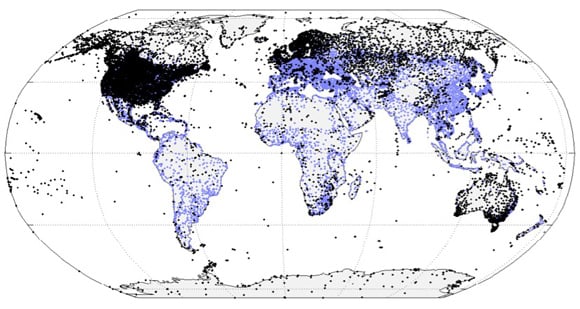 When contacted by The Reg, Muller responded in an email that he believes scientific papers should be widely circulated in "preprint" form before their publication. "It has been traditional throughout most of my career to distribute preprints around the world," he writes. "In fact, most universities and laboratories had 'preprint libraries' where you could frequently find colleagues."

This preprint system, he told us, is being stifled by major journals. "This traditional peer-review system worked much better than the current Science/Nature system, which in my mind restricts the peer review to 2 or 3 anonymous people who often give a cursory look at the paper."

While this more tightly controlled review method may enhance the prestige of major journals, Muller told us, it does nothing for the advancement of science.

"I think this abandonment of the traditional peer review system is responsible, in part, for the fact that so many bad papers are being published," he writes. "These papers have not be vetted by the true peers, the large scientific world."

And so the BEST data and code is out there, available to one and all, in the hope that the "large scientific world" will dig into it, and find out the truth. Because there is, after all, truth to be found – the earth is either warming or it isn't.

Muller also believes there is more work to be done before the data is complete – a glance at the map, above, shows the paucity of ocean-based sensor stations. According to Muller, that's BEST's next project.

Muller also cautions that observers should not take the BEST results and use them to prove something that they can't. When we asked him if it were possible to extrapolate from his team's results and predict whether the temperature increase will continue, he told us: "I don't think that is possible. The key issue is what fraction of the observed change is anthropomorphic. We don't shed much light on that."

But the BEST project did come up with another finding that may influence the development of climate-variation models. "We do show that decadal variations (peaks and dips lasting 3-15 years) are driven much more by the north Atlantic variability (e.g. the Gulf Stream) than they are by El Niño," he told us. "We need to include this effect in the models to see if it changes the part that the models attribute to humans."

The development of those models will require sober analysis of data and cooperation among scientists, technicians, and mathematicians, both from supporters and skeptics of predominantly accepted climate-change science.

And during those discussions, The Reg humbly suggests that we keep two things in mind. One, that although "predominantly accepted" means neither true nor false, automatic contrarianism is of value only when its proponents remain open to data-fueled persuasion.

And, two, that calling a scientist with whose results you disagree a "hockey puck" is hardly helpful. ®