The grids of white lines in China's Gobi desert that have got the world's conspiracy theorists in a lather for a week, are actually calibration targets used to help China's spy satellites, says a NASA researcher.

Since the 65ft-wide white line patterns were spotted on Google Earth, it has been speculated that they were anything from missile testing sites to alien writing. 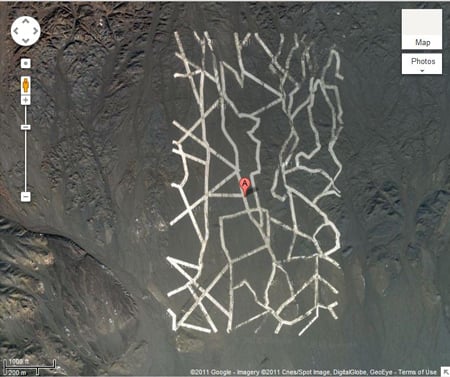 Now believed to be a satellite calibration target

But they are almost definitely images used to calibrate satellites according to Jonathon Hill, a research technician and mission planner at the Mars Space Flight Facility at Arizona State University who spoke to site LifesLittleMysteries.

Satellite cameras will focus on the grids to orient themselves in space. The large size of the grids discovered suggests that the cameras have relatively poor resolution according to Hill.

And they look like they're paint too he says, explaining that the surface has little cracks in it which means it's unlikely to be reflective metal. Chalk or dust would go streaky.

Another feature photoed by Google showed abandoned planes in a circular "Stonehenge" style pattern of bumps - and that's most likely to be a radar test to see how visible military equipment is from the air. It could also allow the Chinese insights into picking out other countries' hidden military bases.

Like the US and Britain, China has spy satellites in orbit around the earth so the discovery of these orientation and testing sites is no huge surprise. ®