Over 30 Polish lawmakers held up paper replicas of the Guy Fawkes mask, made famous by both Anoymous hacktivists and the Occupy movement, during a protest in parliament of their country's signing of the Anti-Counterfeiting Trade Agreement (ACTA), the EU's highly controversial online-piracy legislation.

The parliamentarians were members of the center-left Ruch Palikota (Palikot's Movement), named after founder Janusz Palikot, and the third-largest party in Poland's government, behind the powerful center-right Platforma Obywatelska (Civic Platform) and hard-right Prawo i Sprawiedliwość (Law and Justice) parties. 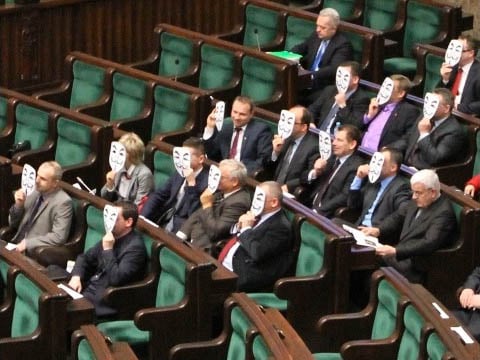 As The Reg has noted, Poland was one of the 21 EU member states that signed off on the legislation on Thursday – only Cyprus, Germany, Estonia, Slovakia, and the Netherlands demurred.

The Ruch Palikota protest was merely one of many in Poland, a country deeply divided between progressive urbanites and traditionalists with more-rural strongholds.

In Lublin and Warsaw, for example, thousands of Poles – many wearing the Guy Fawkes mask – have massed in street demonstrations protesting ACTA, which they claim was hammered out behind closed doors in a deal between content providers and governments. Russia's English-language news channel RT reports that more street protests are planned for Friday.

ACTA protests are not merely in Poland's parliament and on its streets. Earlier this week, hacktivisits self-identified as members of Anonymous took down a broad swath of Polish government websites.

Those protesting parliamentarians and their street-filling supporters had better be careful, however. As wittily pointed out by TechDirt, should the European Parliament ratify the treaty this summer, they could be charged with copyright infringement – Time Warner owns the rights to the Guy Fawkes mask. ®