Dell has added 10Gbps Ethernet cards to two of its 1GigE EqualLogic iSCSI arrays, bumped up their controllers and built in greater Linux and Windows host integration.

Dell says there were 8,000 EqualLogic arrays in the field four years ago and more than 80,000 now.

The two new arrays have had a full controller refresh with an Intel CPU upgrade. They pack their disks and other components into less physical space, taking up a smaller data centre rack footprint. A 2U 6110 enclosure can hold a dozen 3.5in drives or two dozen 2.5in drives. That's a 69 per cent density increase at the 3.5in (near line SAS) drive level and 350 per cent at the 2.5in (10K SAS) level. 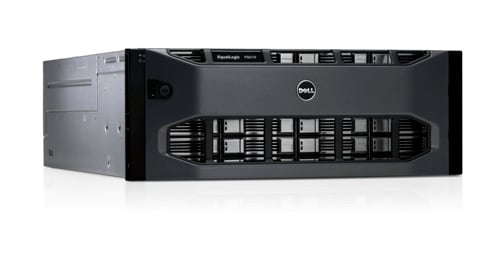 The disks use a 6Gbit/s SAS interface. The 10GbitE ports, both optical and copper, enable twice the PS6010 throughput with one quarter of the ports and Dell exec marketing director Travis Vigil is "very bullish about iSCSI on 10GbitE". This is the first time entry-level PS4000 arrays get 10GbitE connectivity.

The PS6110 is up to 69 per cent faster compared to the PS6010, showing the performance boost from the latest Intel processors, and twice as fast as the 1GigE PS6100. The PS4110 is probably about as faster than the 4010, generally speaking.

We imagine that this controller refresh will now be spread to the PS6500 and 6510.

Version 4.0 of the host integration tools for Windows mean customers can manage several hosts from a single Auto-Snapshot Manager instance, and protect and recover all virtual machines in a Clustered Shared Volume (CSV) with a single snapshot, for the first time.

On the Host Integration Tools for Linux side there is now an Auto-Snapshot Manager for Linux file system protection and recovery. EqualLogic users can integrate with more Linux distributions, including CentOS, SUSE Linux Enterprise Server (SLES) and Red Hat Enterprise Linux (RHEL).