Vote now for the WORST movie EVER

Cinematic roster of shame for your viewing displeasure

Poll It's taken us more than a week, but we're finally ready to raise the curtain on the contenders for the worst movie ever title.

We're still a bit groggy after days of wading through the most malodorous cinematic effluent as nominated by you, our beloved readers, so while you get on with the voting you'll excuse us if we go for a little lie down.

Before that, though, a few quick observations. "Any of the Lord Of The Rings films", "Any of the Pirates of the Caribbean films, "the Bourne trilogy" or "Anything with Adam Sandler or directed by M Night Shamalamadingdong" are not proper suggestions, are they? 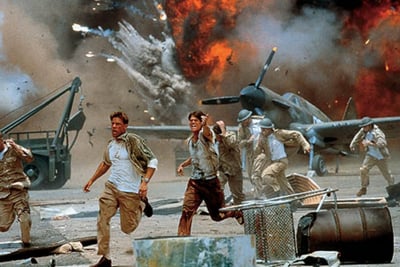 "Ben, it's not the Japanese, it's the frikkin' critics!"

As I've previously said, I'd prod Pearl Harbor up the steps to the podium of shame, at gunpoint if necessary. However, neither it nor U571 made the final cut, even if they both prompt discerning viewers to vent steam from both ears.

That's not because they're saved from the roster of shame by some redeeming feature, but simply that they didn't attract enough votes.

Interestingly, your selection includes movies which are ostensibly perfectly plausible in most ways, except that overall they're complete cobblers. This makes our poll somewhat different from most "worst movie" listings, where total incompetence is generally a prerequisite.

Which is why, of course Plan 9 from Outer Space is regularly hailed as the pinnacle of cinematic fail. Unsurprisingly, it proved (un)popular with you lot, too.

However, we decided to disqualify it on the grounds that its reputation precedes it and we suspect many more people have heard of Ed Wood's sci-fi masterpiece than have actually seen it in its glorious entirety.

Furthermore, we're rather tempted to deploy the "so bad it's good" argument, but let's leave that debate for another day.

Right, that's enough trailer, let's get on with the main feature. Here are the films which didn't crawl gasping into the final contest. There are 13 of them - a significant figure for anyone unfortunate enough to have seen the lot...

...and <drumroll> here are the 20 nominations for the worst movie ever, as selected by the El Reg expert critics' panel:

Let's spare a thought for the poor reader who nominated "My wedding video" as the worst film ever.

He explained: "No RumpyPumpy. Just the ex-wife and her vacuous girlfriends spending the little money I had on rose petal walkways, lime green bridesmaid dresses, bird friendly rice and 'darling' little table decorations that were chucked in the bin 30 secs after we left. My brother is in there too with the worse Best Man speech you can imagine. The 'Many years of happiness' he wished us turned out to be only 3."

The synopsis sounds promising. Anyone like to suggest a title and cast/director for the Hollywood reimagining of this tale of woe?