A team of researchers has found a way of manipulating Phase-Change Memory (PCM) – a material with special properties – so that it can transform into various states at once, allowing the boffins to create multi-level PCM cells. If all goes well, this should pave the way for development of the next generation of data storage media.

Phase-Change Memory is a chemical material that can change its state from amorphous alloy to structured crystal and back again. It has different electrical resistance levels in each state, and its state can signal a binary (one or zero). Like NAND, PCM is non-volatile but it is also faster, being closer to DRAM in speed, and it lasts a long time.

The state change is triggered by applying heat and happens in nano-seconds.

Research boffins at Johns Hopkins University used an alloy of germanium, antimony and tellurium (GST) and tried to study what happens when you apply heat, reasoning that, by applying pressure at the heating point, they could slow down the change. The GST material was compressed between two diamond tips and X-ray diffraction plus a computer simulation gave the researchers an insight into the processes taking place at the atomic level when the state change took place. 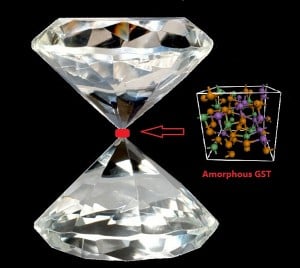 They found that they could alter the electrical resistivity of the material during the change. En Ma, a professor of materials science and engineering at the university and a co-author of the 16 April online edition of the Proceedings of the National Academy of Sciences paper reporting the discovery, said: "Instead of going from black to white, it’s like finding shades or a shade of gray in between. By having a wide range of resistance, you can have a lot more control. If you have multiple states, you can store a lot more data.”

Ming Xu, the lead author and a doctoral student in Johns Hopkins Whiting School of Engineering, said: "This phase-change memory is more stable than the material used in the current flash drives. It works 100 times faster and is rewritable about 100,000 times. Within about five years, it could also be used to replace hard drives in computers and give them more memory.”

Yes, it seems like a dramatic statement, but on the other hand it could even be possible within a few years of development. PCM chips have to be fabbed, and fabs cost a billion dollars apiece, and it will take many years for PCM fab capacity to bulk up to replace hard disk drives. But deduplicated 2- or 3-bit PCM could be cheaper than undeduplicated disk and so take on the primary data storage role as well as the main memory function, with disk being used for cheap and vast data tub storage.

The big "if" is whether PCM can really replace both DRAM and NAND and be a universal memory? The boffins can't say, of course, it's all down to the bleeding edge development engineers in the semiconductor fabs. ®