Collaboration is the name of the game

Open ... and Shut In Hollywood, the good guys nearly always win. In information security, the bad guys ("black hats") often win, in large part because the bad guys know how to collaborate much better than the good guys ("white hats").

From Lulzsec to Chaos Computer Club, hackers increasingly band together to spring sophisticated attacks on websites, mobile applications, and more, while the white hats have mostly failed to coordinate a robust defence.

In a sign that the white hats are getting their act together, a variety of initiatives have sprung up to turn information security ("InfoSec") into a group activity, with the latest being Incapsula's BotoPedia online, community-sourced directory of web robots ("bots"). Incapsula has been developing on its own the directory and its underlying info on the world's worst 50 bots, but recently came to the conclusion that a solo InfoSec effort was never going to be as effective as a group effort.

Other groups, including OpenDNS (new crowdsourcing domain tagging initiative) and AlienVault Open Threat Exchange (an attack on one member of the OSSIM community alerts all others), have also jumped into the crowdsourcing approach to InfoSec. Each is complementary, and suggests that InfoSec must be at least as collaborative as the black hat community is.

After all, the black hats learned to get along and share years ago. They had to. Cracking sophisticated security mechanisms simply became too difficult for any one hacker, as research from Imperva details (PDF):

Hacking has become a group activity. Technical complexities have made hacking too difficult for any single individual to conduct attacks successfully…. For hackers participating in illegal activity the challenge is to preserve anonymity while finding and communicating with partners. To remove this obstacle, hackers have developed numerous hacker forums worldwide. The precise number is unknown, but there are likely several thousand. Some are quite large with nearly 250,000 members (though many are dormant) while others are smaller and quite exclusive with just dozens of hand-selected participants.

On such forums, attack discussions have mushroomed 157 per cent since 2007, as hackers seek to discuss the intricacies of remote code execution, buffer overflows, and script injection. But whether small or large groups, and whatever the topic, they reflect the new reality of cracking security: it's a group endeavour. InfoSec punters need to follow their lead.

One of the most interesting things to come from Imperva's research (below) on black hat forums is just how much time is spent educating newbie hackers: 25 per cent. 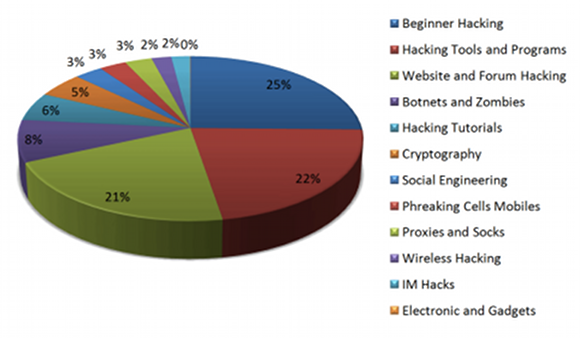 Hence, it's not enough to simply know more than the hackers. Former FBI executive assistant director Shawn Henry argues that "intelligence is the key to [InfoSec]," but that's really only half the solution. The other half is sharing information, and that includes educating new InfoSec professionals in ways similar to how the black hat community operates. Efforts like the Control-Alt-Hack game are nice, but what's needed is community, not simply better teaching tools.

Which brings us back to Incapsula's BotoPedia initiative. Incapsula has spent years building robust lookup and query tools to help users distinguish between good and bad bots. These tools are a product of working with the company's 4,000 global customers and so provide a solid headstart on a community-approach to InfoSec.

It's the right goal - group collaboration on InfoSec - but a lot of work remains before BotoPedia can claim to be a success, any more than Open Threat Exchange or OpenDNS' project can. The InfoSec community can learn a lot from open-source software. The most successful open-source projects start with great code and strong (but somewhat humble) leadership. Many open-source projects fail for lack of ongoing maintenance, among other things.

So if these crowdsourcing InfoSec efforts want to succeed, they need to be as consistent and collaborative as the black hat collectives are. But at least they seem to recognise the need to collaborate. That's a start. ®