Re:Invent Amazon Web Services (AWS) and NetApp have cooked up a new alliance designed to make it easier to use data stored on arrays with Amazon's whatever it is that AWS uses to provide its storage services.

Dubbed NetApp Private Storage, the new offering allows one to place a NetApp FAS appliance in a data centre – specifically one where Amazon's Direct Connect is operating – from where it will be available for “immediate use via iSCSI to and from their EC2 environment” according to this NetApp blog.

Direct Connect is a service AWS offers in a handful of locations and sees data centres offer a fast and direct connection to the nearest AWS facility (which may or not actually be in the same building, AWS won't say).

That's a good idea, NetApp says, because it means one could replicate data from on-premises arrays to mirrored arrays in a Direct-Connect-equipped data centre. Those arrays could then be operated remotely and drive apps in the AWS cloud. Those apps could draw on data from the FAS or Amazon's own storage services, the better to take advantage of the elasticity for which S3 is famous.

This arrangement also means apps running in EC2 can get their hands on data on a FAS with far less latency than would otherwise be the case. 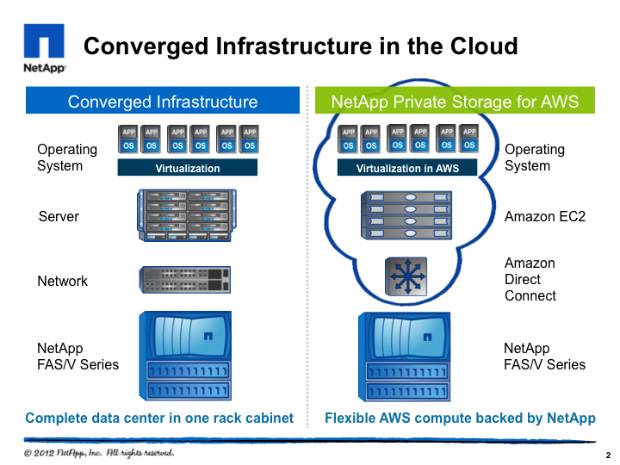 Boring old IT (Left) and Private Storage (right), as NetApp sees both

NetApp Australia's John Martin said it's not unreasonable to describe Private Storage “FlexPod for the cloud” inasmuch as it offers a recipe for achieving the rig described above, but could also be assembled discrete parts. In this instance, the packaging is more than cosmetic as, in the USA at least, one can call a NetApp partner (Avnet), ask for a Private Storage rig and have all the bits put in place.

Martin described the partner services as “the programmatic stuff” and said it's yet to be done beyond the USA, but that Australian users can expect it to be ready in early 2013. NetApp promises the product will reach “Europe and Asia in the near future.” ®