Data download speeds up to 1Gbps and 500Mbps uploads - but how is it done...

Feature Britain now has a 4G network, run by EE, and others are being rolled out. We’re behind the curve, though.

The world’s first 4G network, based on the LTE (Long-Term Evolution) specification defined by mobile telecommunications standards-setter 3GPP (Third-Generation Partnership Project), went live at the very end of 2009, and many more followed in 2010 and 2011.

The standard hasn’t stayed still, either. LTE was defined in a specification called "3GPP Release 8", which dates back to 2008. The organisation is now thrashing out Release 12, but for 4G watchers, the more interesting specification is 2011’s Release 10. It defines the successor to LTE, LTE Advanced. 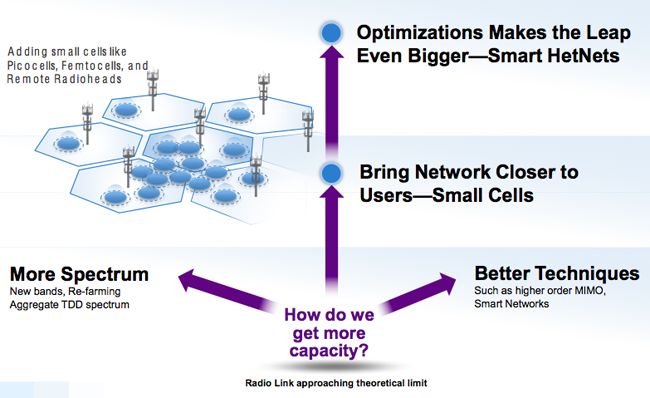 Release 10 was published early in 2011, so it’s now more than two years old. No wonder, then, that some of the world’s mobile phone networks have already begun to implement it. Russia’s Yota claimed it was the first (Russian), going live in October 2012.

However, there are, as yet, no handsets capable of taking advantage of it - nor yet any chips upon which they will have to be based, though some chipmakers, such as Qualcomm, have promised to deliver them shortly. Trials are in place, but they are using devices with pre-release or custom silicon.

China’s ZTE and China Mobile said they’d tested LTE Advanced and achieved a download speed of 223Mbps, but they didn’t detail the kit they’d used to get it.

Other carriers have already begun talking about putting in place parts of the standard, plans that prompted the 3GPP to insist this past April that operators must not make up LTE-based names for the elements of Release 10 they have cherry-picked. "LTE-A" and "LTE-B" have both been used by certain networks, a practice the 3GPP frowns upon.

The problem is that Release 10 defines a number of complementary technologies any of which can be adopted to deliver higher data transfer speeds, which is what LTE Advanced is all about. Release 10’s goal is, simply, to get data download speeds up to 1Gbps (30 bits per Hz) and 500Mbps uploads (16 bits per Hz).

It uses a number of approaches to make this possible: making better, more efficient use of the spectrum, increasing the available bandwidth, and improving coverage to bring client devices closer to the base stations.

No, not that kind of carrier...

An example is "carrier aggregation", also known as "channel aggregation". In this case, "carrier" means the frequency bands being used to transmit a certain block of data, not the network operator. Each 3GPP Release 8 (and 9) band is subdivided into smaller sub-bands, the "carriers".

They can be set to any of six fixed widths: 1.4, 3, 5, 10, 15 or 20MHz, according to need, the state of the local radio environment, the capabilities of client and base station, and how far apart cell tower and phone are. Each carrier is used to transmit different data sets. The ZTE trial centred on carrier aggregation.

But the widest channel width available to Release 8, 20MHz, isn’t sufficient to deliver 1Gbps downloads. You need at least 40MHz. But rather than define a new, wider channel size, LTE Advanced combines existing, 3GPP Release 8 channels to ensure backwards compatibility. Aggregation allows maximum of five "component" carriers to be used to send a single data set, increasing the peak bandwidth from 20MHz to at least 40MHz and, as defined by the standard, potentially 100MHz. 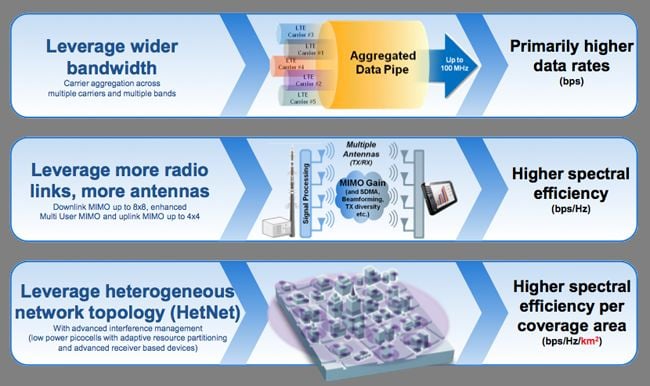 Ideally, the 4G base station and the phone, tablet or laptop can agree to use carriers in adjacent frequencies in the same operating band, but that’s not always possible. Device A might want to aggregate carriers X and Y, but if device B, which is only compatible with 3GPP Release 8 is using Y, A will have to make do with X and Z.

LTE Advanced not only permits the use of non-contiguous carriers within the same LTE band - the example I’ve just described - but also carriers in different bands altogether. Which extra bands can be used depends on which ones are supported by both the base station and the client device, and which carriers within them are available for aggregation.

Aggregating channels that are not adjacent, even if they’re in the same band, requires clients and base stations to incorporate separate transceivers for each non-contiguous component carrier.

Contiguous carriers, on the other hand, can be treated as a single channel from a radio perspective, so will only need one transceiver. Adding transceivers, especially to client devices, adds complexity and cost: the price of the extra transceivers and of the bigger battery or power management system needed to ensure running them maintains a decent runtime.

Carrier aggregation is LTE Advanced’s central speed-boosting technique, and it’s what will allow the standard to get data flowing at up to 1Gbps. But not without the help of MIMO, the use of multiple antennae to make more efficient use of a given band.

Next page: Finding MIMO: But it's NOT universally available
Page: