Motorola has shown off an electronic authentication tattoo and an FDA-approved pill that uses the body to transmit passwords, and says it wants to see a new generation of smartphones geared towards such wearable – or edible – technology. 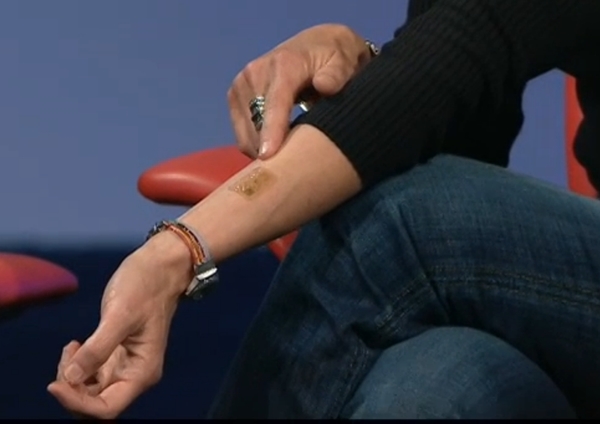 The Number of the Beast

Speaking at the D11 conference, Regina Dugan – the first female head of DARPA who moved to the Chocolate Factory last year – argued that with our plethora of devices, authentication needs to be simplified. The average user has to sign-on 39 times a day, and it takes them 2.3 seconds a time to do it each time – and that's if you remember the password.

To crack this, she suggests either getting tattooed or using authentication in pill form as a way of saving those precious seconds that are being so wastefully lost. The industry is still stuck with the same login technology that it has used for 40 years, she said, and Motorola has the answer – or at least the partners to provide it.

She showed off a stick-on electronic tattoo on her arm consisting of a wireless power coil, temperature, ECG, phone sensors, and a small LED with a wireless antenna border. Motorola is working with the inventors, Cambridge, Massachusetts firm MC10, on a version for authentication, she said, and they would be available in a wide variety of designs.

"It may be true that 10-20 year-olds don't want to wear a watch on their wrist, but you can be sure they'll be far more interested in wearing an electronics tattoo, if only to piss off their parents," she said. So-called theologians might disagree*.

The stick-on circuitry would last about two weeks before needing to be replaced, and the connections between the silicon and sensors are designed to flex 200 per cent, she said. The system would be sprayed with a plastic composite to assure your morning shower doesn't leave you a non-person.

Dugan also showed off a pill containing a switch and what she described as an "inside-out potato battery" that uses stomach acids as an electrolyte and causes the switch to flick on and off. The resulting "18-bit ECG-like signal" is then broadcast throughout your body for as long as the device remains in it. 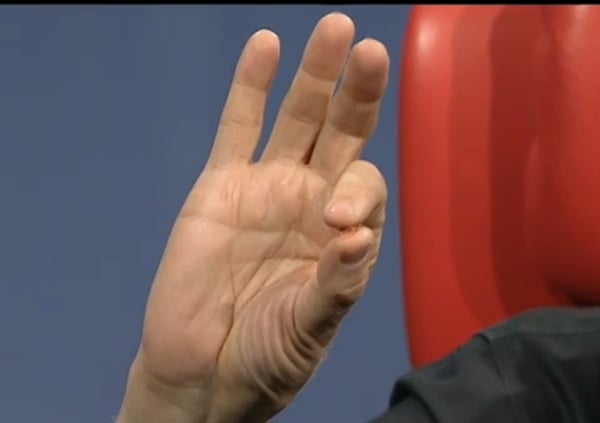 "It's really true; it means that that becomes my first superpower. I really want this superpower," she said. "It means my arms are like wires, my hands are like alligator clips, and when I touch my phone, my computer, my door, my car, I'm authenticated in."

The system, developed by Proteus Digital Heath, was FDA-approved and CE-stamped for people to take up to 30 of these pills a day she said, for their rest of your lives, she said.

"We're not shipping that right away," Motorola CEO Dennis Woodside said during the interview. But taking a long-game approach to the evolving mobile market is going to be key to reviving the company, he said. In 2010 Samsung was selling as many phones as Motorola is now, he said; there are opportunities to be had.

After Google bought Android it funded the team for two years before releasing the operating system, he said, a strategy some decried as madness. The results have been rather good, he pointed out, and Google's willing to make a similar investment in the company that was there at the start of mobile computing.

The first stage of this is the Moto X, due to launch in the autumn. Woodside said he had it in his pocket, but refused to get it out. The new handset will be 70 per cent assembled in the US, coming from a plant in Fort Worth, Texas, and having manufacturing close at hand would allow the company to try out new manufacturing processes such as 3D printing.

Motorola is cracking a long-standing problem in mobile electronics by enabling low-power motion sensors without needing to boot the full operating system, he said. Phones should detect your location and movement and adapt their interfaces to match the situation.

The price for this "contextually aware" feature is battery power, and the fact that phones can't last a week without recharging is a major issue the company wants to solve. Larry Page is also apparently frustrated that phones still break, so the engineers are trying to toughen up smartphones. ®

One marketing problem Motorola may not have anticipated is the reaction of biblical literalists to its wearable authentication systems.

A surprising number of people in the US still adhere to an apparent literal translation of the current version of the Bible. These include Jehovah's Witnesses, who refuse blood transfusions and shun those who take them, to those who look to the finale of the New Testament: The Book of Revelation – or, for you believers of the Catholic persuasion, The Apocalypse.

The text, thought to be written about 60 years after the biblical death of Christ, is regarded as either a description of the end times of humanity, a satirical pastiche on the increasingly subverted tenants of Christian bureaucracy, or a really bad mushroom trip on a Greek island. Nevertheless it contains the following warning:

It causes all, both small and great, both rich and poor, both free and slave, to be marked on the right hand or the forehead, so that no one can buy or sell unless he has the mark, that is, the name of the beast or the number of its name. This calls for wisdom: let the one who has understanding calculate the number of the beast, for it is the number of a man, and his number is 666.

Be reassured that the majority of people of faith in the US and elsewhere aren't quite so inflexible. Those that aren't may be shrill, particularly in the US, but do not form a representative sample of Christianity.