Google has begun testing a new version of its V8 JavaScript engine for the Chrome browser that improves application performance by executing and compiling JavaScript code at the same time.

JavaScript is often thought of as an interpreted language because developers deploy their applications in source code form, rather than as compiled binaries. But modern JavaScript engines actually compile JavaScript to machine code on the fly before executing it.

That compilation step can eat up some processor cycles, though, so to minimize delays, V8 doesn't get too fancy about it – at least, not at first. The code is initially compiled in a very straightforward way, without spending much time on performance optimization.

But V8's compilation infrastructure – dubbed "Crankshaft" – is clever. Code that is executed often is actually compiled a second time after the application is already up and running, this time piling on the optimizations to ensure maximum performance.

This optimization phase can be processor-intensive, however, and earlier versions of V8 would run it on the same processing thread that was executing the running application. That meant that if Crankshaft started optimizing a large chunk of code, JavaScript execution could stutter and even appear to pause. 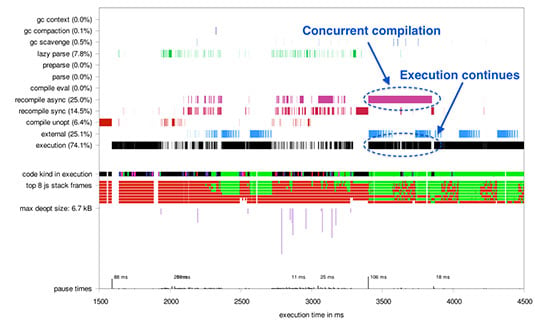 Gaps in the black bar indicate times when JavaScript execution paused.
With earlier versions of Chrome, the circled portion would have been all pause (click to enlarge)

The new Chrome Beta changes that. Compilation now takes place in a separate thread that runs concurrently with the application thread, allowing the precompiled JavaScript to keep chugging while Crankshaft works on optimizing the key bits.

This doesn't just apply to the desktop browser, either. Ever mobile-minded, Google has baked the same changes into the Chrome Beta browser for Android. The result, Guo said, was a speedup of as much as 27 per cent on some JavaScript benchmarks running on a Nexus 5 handset.

The catch, for now at least, is that the revamped V8 is only available in the Chrome Beta channel. Google doesn't announce hard dates for when it plans to promote Chrome builds from Beta to Stable status, but if all goes well in its testing, we can assume that concurrent compilation will be enabled for all Chrome users within the next few months. ®