Video Boffins from the University of Oulu in Finland and Huazhong University in China have put together a prototype that uses an Android smartphone's magnetometer as a short-range one-way communications channel.

The applications for such a system are limited, of course: magnetic fields decay very quickly, so the system has a range of about a centimetre, and its speed is a blistering 44 bits per second.

The researchers think that using the magnetometer that's built into most phones could have some practical application nonetheless: its very short range means, for example, that communications would be harder to eavesdrop than signals from Bluetooth or NFC transceivers in the phones.

In this paper, the researchers also argue that NFC has relatively limited penetration in Android phones: “Current estimates claim that 66 per cent of smartphones will have NFC capability by 2018, but similar claims have been made for years,” they note.

Their point is that magnetometers are already more common than NFC, and can be used by any smartphone that already has the technology built in. 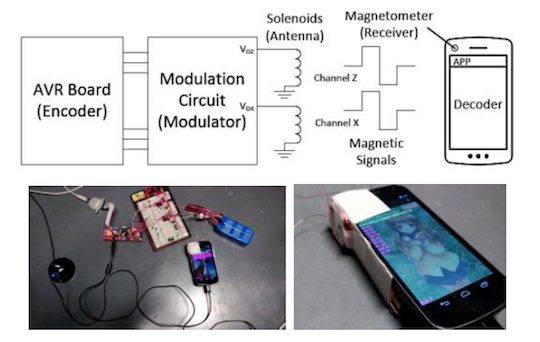 The University of Oulu team's schematic and prototype

While a unidirectional channel is less useful than two-way comms, the researchers say it could be used to add information to QR Codes without requiring Internet access. The demonstration application transmitted MIDI-like standard music to the phone.

The Register would add that a suitably equipped external terminal could use this extremely short-range channel to pass a strong encryption key to the phone to secure a bidirectional channel against eavesdroppers.

Their protocol-plus-prototype, called Pulse, uses a four-level ASK (amplitude shift keying) scheme to encode the data for transmission, and the main reason for the slow speed is that they fixed the pulse lengths at 80 ms, “long enough to account for the smartphone's magnetometer limitations”.

Those limitations, they explain, include “the sample rate of the magnetometer hall sensor, the number of levels in our ASK data encoding, and the channels’ capacitance. The magnetometer sensor in smartphones is unable to detect higher frequency magnetic signals, and the Android OS restricts the sampling rate of sensors for power efficiency”.

A couple of seconds of calibration signal at the beginning of an exchange trains the system to ignore background magnetic noise.

For the external terminal, the group built a prototype consisting of a simple control board and modulator connected to two solenoids, which transmit magnetic fields to be detected by the phone's magnetometer in the x and z axes (the y axis is ignored). On the phone, all Pulse needs is an Android application that detects and calibrates the magnetometer receives the data.

The team was led by Vassilis Kostakos of Finland's University of Oulu, and the paper will be presented at the ACM's UbiComp conference in Seattle in September. ®