Snowden wants YOU – yes, YOU – to build spy-busting tech

Says it's your civic duty to turn our KIDS into SYSADMINS

National Security Agency leaker Edward Snowden wants the geeks of the world to develop anti-spying technology to prevent governments spying on their citizens.

In a keynote address delivered to the Hope X hacker conference in New York City on Saturday, Snowden said encryption was the "first step" in fighting against government surveillance and that new platforms to prevent traffic analysis techniques being used to figure out users' associates were key.

He said it was the "civic duty" of technologists to educate the public on how systems work so that they can understand the risks posed by the devices, apps and services they use.

"You, in this room right now, have both the means and the capabilities to help build a better future by encoding our rights into the programs and protocols on which we rely on every day," Snowden told the conference's audience of hackers and hacktivists, adding that that was where he planned to focus his future work.

"How governments discover their adversaries uses the same techniques they use to discover spies [and] journalists."

He urged technologists to develop "padded protocols" resistant to traffic analysis, even if they reduced performance, along with mixed routing which divorced individual connections from origination points that went further than Tor.

Geeks should collaborate to build these platforms and then form teams to hack them to bits in order to discover - and subsequently close off - avenues which a government may use to attack users. 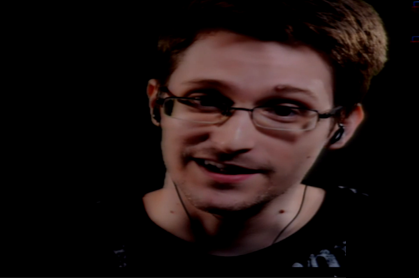 Tech platforms had to be usable too, Snowden said, pointing out that GPG, while effective, was "damn-near unusable" for the average user.

"We need non-attributable communications for unattributed internet access that is easy, transparent and reliable," he said.

He specifically called on graduate students to consider how the "worst people on earth" may attempt to break into the systems they build.

The Luddite public needed to be educated too in order to shift the "middle ground" of technical illiteracy.

"You are an advocate to help ... shift the middle ground of technical literacy. A lot of young people understand how technology works to an extent, but the system functions are hidden from them - they don't know where the dangers are and they trust their devices.

"Those of use who know even the slightest bit have a civic duty to help educate the people around us, just like the rise of literacy."

He said to a round of applause that a "high priesthood of technology" would be bad for everyone.

Daniel Ellsberg, who leaked the Pentagon Papers, congratulated Snowden and Wikileaks leaker Chelsea Manning (formerly known as Bradley Manning) for their work in exposing governmental and military secrets, adding that Snowden was the "only person in the f***ing NSA who did what he should have done".

"How many people should have done what you did?" he asked Snowden. "Noone has done more to uphold the truth".

Snowden's talk can be watched below. ®