Squeeze out a bid for colossal coprolite at this weekend's auction 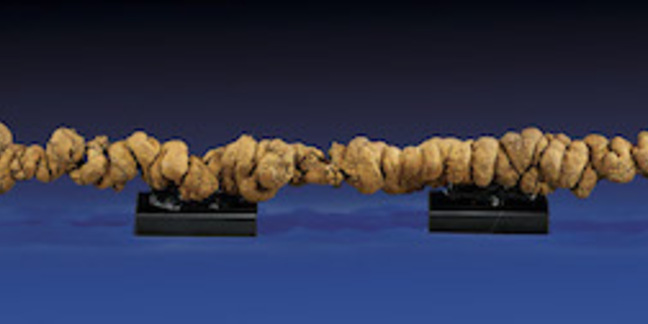 A colossal dinosaur poo is about to go to under the hammer.

Auction house I.M. Chait has listed what it describes as an “Enormous and rare coprolite” said to measure 40 inches - 101.6cm - from end to end. The object is believed to have been the result of a meal consumed during the Miocene-Oligocene epoch, some 23 million years ago.

Here's the auctioneer's blurb about the miocene motion:

“This truly spectacular specimen is possibly the longest example of coprolite ever to be offered at auction. It boasts a wonderfully even, pale brown-yellow coloring and terrifically detailed texture to the heavily botryoidal surface across the whole of its immense length. The passer of this remarkable object is unknown, but it is nonetheless a highly evocative specimen of unprecedented size, presented in four sections, each with a heavy black marble custom base, an eye-watering 40 inches in length overall.”

The enormous coprolite. At a guess it came after a nasty vindaloo

The prehistoric poo is expected to fetch between $US8,000 and $10,000 when it goes under the hammer.

If that's more than you're willing to pay for a no-longer-steaming pile of fossil faeces, the July 26th auction also features a collection of 5 coprolites expected to sell for just $4,000 to $6,000. There's also a single large specimen from the Jurassic expected to sell for a mere $500 and $700.

That's a price suggesting tyrannosaurus turds aren't exactly an asset that will swell your pension fund. But it's a small price to pay for an object so intriguing it will pull even the dullest dinner party out of the shit. ®

How I found a small, weird-looking horned dinosaur from eastern USA

DINOSAUR BLOOD: JUST RIGHT, as Goldilocks might say, if drinking it

Not too hot, not too cold. Yum

DUCKCROCZILLA 'alien' dinosaur could emerge from THE SEA