Edward Snowden and Kim Dotcom have joined hands and waded into New Zealand politics ahead of the nation's forthcoming election, by alleging prime minister John Key has told fibs about his government's involvement with the NSA's nasties.

Snowden has released a new missive in which he claims that the many tools with which he worked at the NSA well and truly covered New Zealand.

That's politically sensitive because prime minister Key has said, during the election campaign and before, that New Zealand's government has not conducted mass surveillance of its people.

Snowden says New Zealand's government is up to its neck in the NSA's activities and offered the following statement:

Let me be clear: any statement that mass surveillance is not performed in New Zealand, or that the internet communications are not comprehensively intercepted and monitored, or that this is not intentionally and actively abetted by the GCSB, is categorically false.

Snowden also says that when using the XKEYSCORE tool offers its users a "Five Eyes Defeat" button that gives analysts the option to exclude searches from data drawn from the five-way intelligence alliance involving the U.S., U.K., Canada, Australia, and New Zealand.

Spicing this stew is a new allegation, reported by (as reportedthe New Zealand Herald) of an email from Warner's Kevin Tsujihara to Mikael Ellis of the MPAA alleging that Key allowed Dotcom to settle in New Zealand in order to expedite his extradition to the USA.

The problem: the source appears to be a print-out of an e-mail - which would make proving its authenticity problematic at best.

Snowden amanuensis Glenn Greenwald has also weighed in at The Intercept, detailing how the Kiwi government engaged in mass surveillance through its Government Communications Security Bureau (GCSB).

Greenwald claims that the GCSB commenced work to implement a mass metadata surveillance system in 2012 and 2013, a project which Key says he spiked before it went into operation. That program included the following allegation:

"Top secret documents provided by the whistleblower demonstrate that the GCSB, with ongoing NSA cooperation, implemented Phase I of the mass surveillance program code-named 'Speargun' at some point in 2012 or early 2013. “Speargun” involved the covert installation of 'cable access' equipment, which appears to refer to surveillance of the country’s main undersea cable link, the Southern Cross cable. This cable carries the vast majority of internet traffic between New Zealand and the rest of the world, and mass collection from it would mark the greatest expansion of GCSB spying activities in decades."

Key has since released four cabinet papers ( see this, this, this and this, all PDFs) he says disproves the allegation of a cable tap and mass surveillance efforts.

The information detailed above dribbled out over the last few days and was then re-hashed at an event in New Zealand on Monday evening titled "The Moment of Truth" and playing at YouTube.

Greenwald spoke at the event and said, among other things, that he has no interest in influencing the outcome of New Zealand's election.

"The idea that I got on a plane and flew 40 hours ... because I developed a desire to influence the outcome of the election is frivolous," he said. 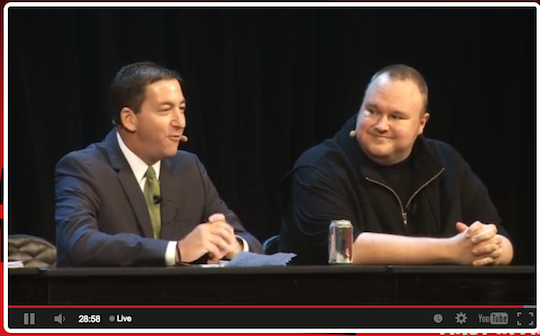 Greenwald also denied that he was being paid for his trip to New Zealand. But he agreed he was invited by New Zealand's Internet Party, an entity formed after urging by Kim Dotcom. The Mega man also funded the party and has promoted it vigorously in recent months.

It's hard to say if these revelations will have any impact on the election. The Internet Party and its allied Mana Party have occasionally hit 3.5 per cent in opinion polls. Perhaps that will spike in the wake of today's revelations. ®