Only one problem: it won't make the slightest difference. And they know it

Brazil is moving ahead with plans to build an "anti-NSA" internet cable to Europe, even though it won't make the slightest difference to spying efforts.

Francisco Ziober Filho, president of state-run telecoms company Telebras, announced earlier this week that the company will form a joint venture with Spain's IslaLink to run the submarine connection between Fortaleza at the northern tip of Brazil and Lisbon, Portugal. Filho also strongly suggested that the cable will not include any equipment from US manufacturers – take that, NSA.

Despite the rhetoric, however, one expert in cable infrastructure told The Register that not only does the cable not make economic sense but it amounts to little more than "a $185m propaganda statement" on the part of Brazilian president Dilma Rousseff.

Roussef announced plans for the cable in February, just a few months after she found out that her personal phone calls had been tapped by the NSA. She said the cable project was vital to “guarantee the neutrality” of the internet by protecting Brazil’s traffic from US surveillance. 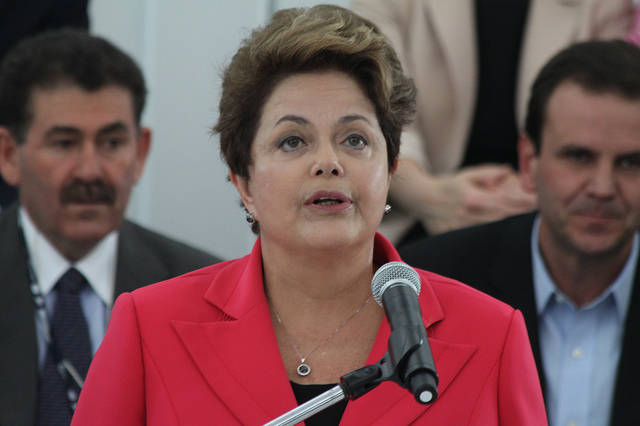 Little real progress was made, however, since everyone in the infrastructure business knows an unpalatable truth: the cable won't hinder surveillance at all.

Tim Stronge, an analyst at Telegeography Research, told us that documents leaked by Edward Snowden on NSA tapping of international traffic revealed that the agency was able to access cables from multiple different vendors and that many of the taps did not even touch US cities. In other words, it doesn't matter where your cable is physically located or who built it. If the NSA wants in, they will get in.

The Brazil–Portugal cable is also a bad economic decision. Although there is an old cable (Atlantis-2) that follows the same approximate route as the new one, Stronge says there is relatively little unmet demand between Europe and Latin America. "It doesn't make much sense," he explains. Almost all traffic from Latin America is routed through the United States (in particular Miami) because it is much cheaper to do so. 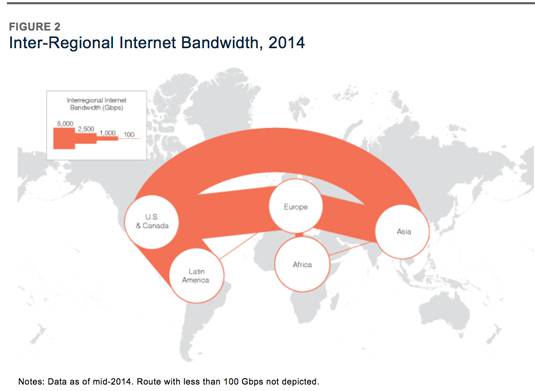 See that tiny thin line from Latin America to Europe? It's about to get very slightly thicker. Graph by Telegeography (click to enlarge)

There are economies of scale when it comes to traffic routing, which is why it is currently 12 times cheaper to transit through New York than to route through Brazil's business center of São Paulo.

Thanks to internet technologies, it doesn't matter where content is hosted, and the speed differential between going direct to Europe from Brazil or via the United States is largely irrelevant.

So why is the anti-surveillance cable back on the agenda? It may be something to do with the fact that Brazil held its elections this week and Rousseff was re-elected for a second four-year term. 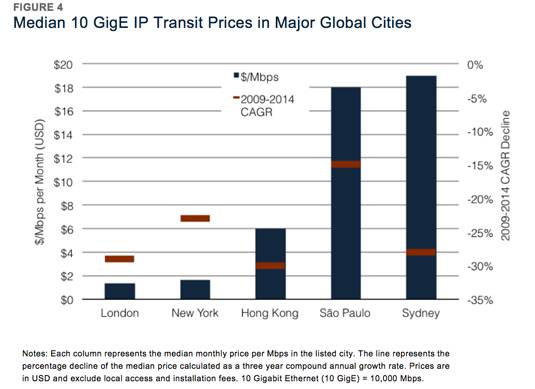 Economies of scale: Brazil not doing so well on global transit costs. Graph by Telegeography (click to enlarge)

If Brazil really does want to make itself a future center of Internet power, the solution lies not running cables along new routes but in making it more attractive for ISPs to base themselves in the country.

"There are lots of companies that would love to host in São Paulo," Stronge tells us. "But the import duties alone on equipment can be as high as a 100 per cent tariff, so it makes more sense to locate in Miami."

That is probably why there is another new cable planned for Brazil, this one backed by Google. It will also run from Fortaleza, but rather than heading for Europe it will instead land in Boca Raton, Florida. It will also cost a third of the price, at $60m.