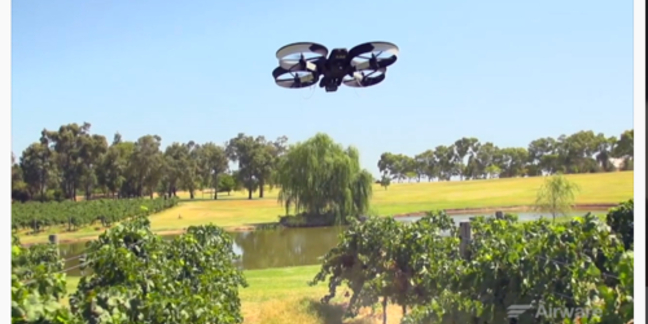 A House of Lords committee has been told that while civilians are “undoubtedly” using drones to get up to no good, it was pretty difficult to do anything about it.

Chief Inspector Nick Aldworth of the Metropolitan Police told the EU Internal Market, Infrastructure and Employment sub-committee that drones, known as Remotely Piloted Aircraft Systems (or RPAS) in Blighty’s official parlance, had been used maliciously in the country, but the cops only really found out about it from the internet.

“Certainly we are looking at the emergence of this technology, that we believe undoubtedly creates opportunities for negligent, reckless or malicious use,” he said.

“We’ve seen some behaviour and examples across the world that we would seek to enforce against, and some of that has occurred in the UK," he added.

“Our intelligence feed into that activity at the moment is the internet, and material posted on the internet, often showing the offences after they’ve actually occurred, thereby leaving us very little opportunity to subsequently investigate,” he admitted, adding that he was working within a police group to address this.

Unmanned aerial vehicles are most commonly used by civilians for filming or snapping pics, often by professionals, such as movie studios. However, as drones get smaller and cheaper, they face less flight restrictions and become more available to people such as amateur photographers and enthusiasts.

Answorth pointed out that the UK doesn’t have a criminal privacy law, although he said that laws such as the Sexual Offences Act could cover crimes including voyeurism where drones were “hovering outside people’s bedrooms for whatever nefarious reason”.

Other laws concerning flight and navigation would cover issues such as flying over crowded areas, where a sudden loss of power could cause serious injury if a 7kg drone dropped out of the sky.

But although laws exist that can cover drone offences, it’s not easy to catch the perpetrators. Answorth said even if you happened to notice a drone outside your window and called the police, unless they showed up immediately, it would be pretty tough for them to figure out who the pilot was.

The committee is investigating drones after the European Commission said in April this year that it wanted to be a global leader in the market, and figure out how to ensure people’s safety and data protection.

The Lords want to assess the advantages and disadvantages of regulating drones at national, EU or international level, and the uses they might be put to, as well as the legal issues.

The committee expects to release its report in March next year. ®

Remember that lost memory stick from Heathrow Airport? The terrorist's wet dream? So does the ICO

Who owns all that valuable training info?

Lucky, lucky, Westminster residents: Who better to look after your housing benefits than Capita?

Contractors welcome Lords inquiry into IR35 before tax reforms hit private sector but fear it's 'too little, too late'