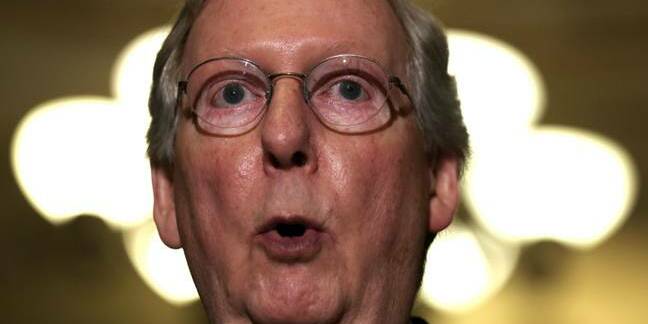 For your spies only ... Mitch McConnell

+Comment The US Senate has passed the USA Freedom Act that adds mild limits to Uncle Sam's intelligence agencies' activities on American soil. It was passed with a 67-32 vote.

Glad the Senate finally passed the USA Freedom Act. It protects civil liberties and our national security. I'll sign it as soon as I get it.

The new legislation [text] means that once again the NSA and others can access the logs of Americans' phone calls, emails and internet use for investigations, but with some subtle changes to the rules: the intelligence agencies will have to ask telcos for the records, and only for specific investigations, as opposed to intercepting all that data and keeping a note of it just in case it's needed later.

In other words, the ISPs and telephone companies keep the records, and the NSA and Feds have to ask for them, rather than grabbing it all off the wire directly. One hopes the g-men cite investigations more specific than "fighting terror" when they come knocking for your private information.)

In addition, the Foreign Intelligence Surveillance Court will now not just hear evidence from the US government's side but will, in certain circumstances, have an advocate presenting the viewpoint of those being spied upon, and more of the court's judgments will be made public.

But these changes only affect American citizens. For the other 6.81 billion humans on Planet Earth, it's business at normal – and your personal data is free to be plundered at will by the spies at the NSA and their allies.

"It's no secret that we wanted more. In the wake of the damning evidence of surveillance abuses disclosed by Edward Snowden, Congress had an opportunity to champion comprehensive surveillance reform and undertake a thorough investigation, like it did with the Church Committee," said the EFF in a statement.

"Congress could have tried to completely end mass surveillance and taken numerous other steps to rein in the NSA and FBI. This bill was the result of compromise."

Nevertheless, the USA Freedom Act is a big step forward: it's the first time in nearly 40 year that the intelligence community has had their powers limited at all, and over that time a lot of privacy has been eroded. Most politicians and companies are pleased with the result.

It's worth noting that presidential candidate Bernie Sanders (I-VT) voted against the act, as did Rand Paul (R-KY), who attempted to filibuster the bill.

That is not the kind of free society I want for our children. #NSA #PatriotAct pic.twitter.com/Yau3HQMPqs

The vote was, however, a personal disaster for Senate Majority Leader Mitch McConnell. He introduced a bill to make sections of the Patriot Act permanent, which failed to garner much support, then delayed voting until the very last minute in an attempt to get his way.

When the Senate refused to play ball, and let the Patriot Act's NSA-friendly Section 215 lapse, McConnell was forced to climb down and allow a vote on the USA Freedom Act. But, at the last minute, he introduced three amendments aimed at gutting the legislation.

McConnell wanted to alter the law to remove the reforms to the Foreign Intelligence Surveillance Court, extend the amount of time before the NSA stopped slurping Americans' data to a year after the legislation passed, and required companies to give the government six months of notice before deleting subscribers' data.

But his attempts came to naught as all three amendments were voted down by a clear majority of the Senate. A visibly furious McConnell was reduced to stalking around the Senate floor glowering at those who refused to follow his lead.

It's important to remember that the USA Freedom Act wouldn't have been an issue were it not for the whistleblowing of Edward Snowden. The very first leak from the Snowden archive covered Section 215 spying and provoked a debate that led to Tuesday's legislation.

The fact is that no one but a select few knew for sure that this level of American-on-American surveillance was going on until Snowden fled the land of his birth for life as a fugitive. Plenty of people suspected that something dodgy was going on, but were dismissed as tin-foil hatters and paranoid conspiracy theorists.

Just two months before the Snowden leaks started flooding out, the Director of National Intelligence James Clapper told to his congressional masters in a briefing under oath that the NSA wasn't collecting data on millions of innocent American citizens, when questioned by Senator Ron Wyden.

The fight to protect Americans' privacy rights is far from over though. And we'll keep fighting.

After the Snowden leaks started, Clapper insisted he told the truth, provided you use his definition of "collect" – apparently to the intelligence community, it means storing data but not looking at it. An aide recently suggested that he forgot about the programs, which is unusual since he was given the question 24 hours in advance of his grilling.

So while all the backslapping is going on over this step forward in liberty, spare a thought for the poor sod who gave up a six-figure salaried job on the island paradise of Hawaii to be hunted around the world, and who has ended up a fugitive in a Russian apartment as a result – and his loyal girlfriend who fled the US to be with him.

Snowden may never be able to come back home, but the country he loves has benefitted enormously from his whistleblowing. ®