Trebles all round: The BBC's won this licence fee showdown

It's been a great week for the BBC. The Corporation has expanded the Telly Tax onto computers and, on top of that, gained a guarantee of annual inflation-rate increases in the television licence fee. These cancel out the new requirement that the BBC funds free TV for the over-75s, which it must do in full from 2020.

As a bonus, the government won't bring in decriminalisation of non-payers, a measure which was approved by the (democratically elected) House of Commons but sunk in the (politically appointed) House of Lords – a retirement home for many senior BBC staff.

"The Government will consider carefully the case for decriminalisation in light of the Perry Report and the need for the BBC to be funded appropriately – [but] no decision will be taken in advance of Charter Review. (pdf, three pages)

But there's another reason why managers can break open the Krug at W1A – and it's not one you hear about so much. Because the BBC's main revenue stream is a tax on households, its income has exploded over the last three decades. The number of households has increased enormously, up 55 per cent since 1961. The BBC does a lot more with that money, of course, but arguably not 55 per cent more.

And that trend is set to increase, according to the latest ONS predictions. Only by looking at the household trend can you see what a cracking deal the BBC won this week. 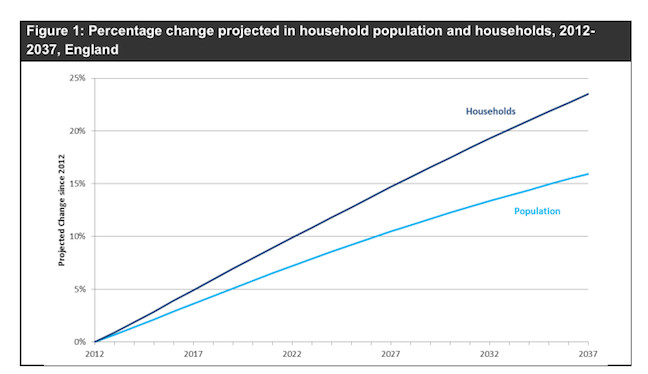 Now you can see why BBC director-general Lord Tony Hall is so keen on a universal household levy, rather than something that reflects usage or consumption, or even the ability to pay.

For sure, the long-term future of the telly tax is up for grabs, as the Charter Review looks at the organisation and funding of the BBC. After this week, however, this BBC is in a stronger position.

You wouldn't know it from the headlines, though, which were seized by a chorus of BBC managers, ex-managers and media luvvies, claiming that a great British institution was being murdered in front of us.

The deal was a "drive-by shooting", according to Labour MP Paul Farrelly in the Guardian. Lord Birt said it was "deeply shocking… a very dangerous precedent". "Awful" said former D-G Lord Patten, while Lord (Melvyn) Bragg called it a millstone. "Scandalous" wrote Diane Coyle, vice-chair of the BBC Trust, and an economist.

"It is a scandal that such a profound cut to the BBC’s ability to deliver… was imposed in a bullying backroom deal over a couple of days." But, wait. The BBC itself says it's no cut at all.

The response to the changes is so overwrought, it's bordering on emotional incontinence. Can we expect something similar every time BBC funding is discussed? The chorus of British establishment figures complaining, sentimentally and falsely, that the sky is falling, is narrowing the public debate. Today, the BBC is already a subscription service and is very good value compared to Netflix. Since most people won't opt out, the BBC ought to receive more from subscriptions than it receive from the license fee. It has better prospects in a multi-subscription world than anyone else.

"Far from being a raid on the BBC’s finances, the whole thing has been an elaborate PR exercise," he wrote this week.