WINGED VELOCIRAPTOR 'from HELL': Closest thing ever to a real DRAGON?

So who says there has never been any such thing as dragons? Scientists today have announced details of a newly-discovered dinosaur that was more than a bit like the dragons of legend.

Nature Scientific Reports brings us news that the skeleton depicted below represents “an aberrant and rare animal compared to the vast majority of other Liaoning dromaeosaurids, due to its large body size and proportionally tiny forearms.”

That unkind assessment comes from the fact that Zhenyuanlong suni, as the creature has been named, appears to have been over 160cm long, but to have had arms not much bigger than the other chicken-sized members of the feathered dinosaur family found in ChIna's Liaoning Province.

While Zhenyuanlong suni's feathers were extensive - Dr Steve Brusatte from the University of Edinburgh's School of GeoSciences describes them as “ quill pen feathers … just like an eagle or a vulture” - the dino's small arms mean it probably couldn't fly with a flapping motion, if at all. The dino also had a long, feathered, tail, a pronounced crest, a hairy body and decent teeth, an unusual combination that led Brusatte to give it the “fluffy feathered poodle from hell” label. 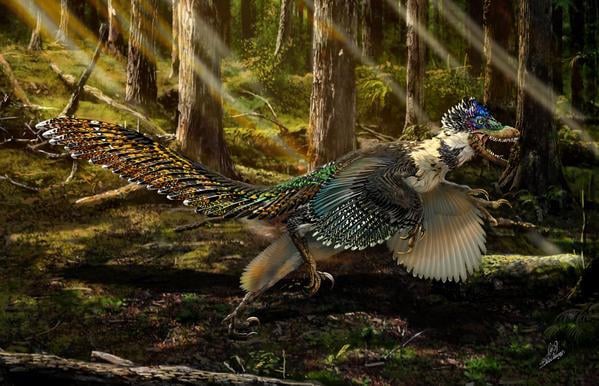 Such colourful language aside, the Nature paper says Zhenyuanlong suni shows “... even dinosaurs whose skeletons may not look to be optimized for flight can still possess large and complex wings, that feather types and morphologies were widely variable in species bracketing the dinosaur-bird transition.” The paper adds that the find, made amidst a well-trawled fossil bed, shows “... that even the best-sampled fossil assemblages can still yield surprising new taxa and specimens with important new anatomical information.” ®

"Zhenyuanlong" means "Zhenyaun's dragon". This might draw some argument from traditional dragon fanciers, who would no doubt prefer to see leathery rather than feathery wings - not to mention a confirmation of ability to fly, somewhat increased size, and of course an ability to breathe or spit fire. Nevertheless this creature would seem perhaps as much like a dragon as anything else known to have existed. -Ed