SUV shows potential, but maybe not for backward Blighty

Vulture at the Wheel Ask me what my ideal electric car would be and I’ll probably tell you one with a range of 400 miles and a three-minute charge time. Shame no such car exists, I hear you say. Not so. I drove just such a vehicle last week. 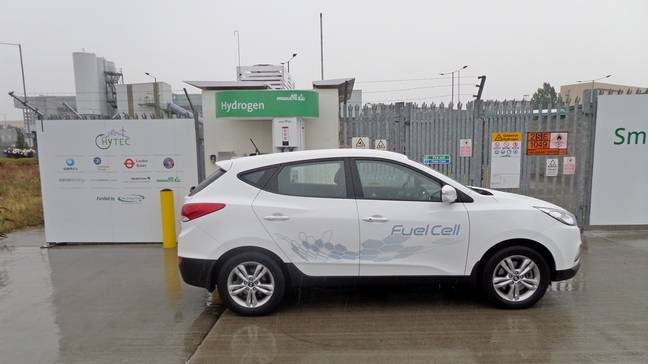 The ix35 at the hydrogen filling station near Heathrow. One of three in the UK at the time of writing

Hyundai’s ix35 Fuel Cell is part technology demonstration, part run-of-the-mill, commercially available motor vehicle. Right now you can buy one off the shelf from Hyundai UK, though there are certain compromises to be made.

All the vehicles on sale or already sold in the UK (and that’s exactly 17 at the time of writing) are LHD thanks to the fuel cell sitting where the steering column would need to be.

And they are all front-wheel drive only because one of the hydrogen fuel tanks takes up the space needed by the gubbins that usually drives the back wheels. Oh, and it will cost you over fifty grand. And, erm, there are only three hydrogen filling stations in the UK right now. 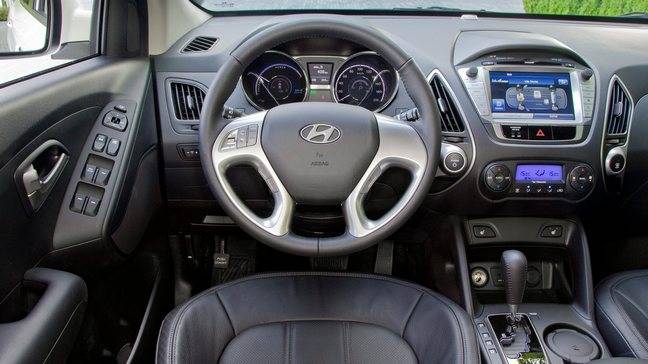 But if you can overlook those four drawbacks the ix35 Fuel Cell is a highly desirable little wagon which drives just like any other good, modern EV but without any of the range restrictions imposed by current battery technology.

Motive power is supplied by a 100kW (136ps) electric motor which in turn is connected to a 24kWh lithium-ion polymer battery jointly developed by Hyundai and LG Chemical. The drive motor takes power from either the battery or a combination of the battery and the 100kW hydrogen fuel cell, depending on driving conditions.

The battery meanwhile can be charged by the fuel cell and by the regenerative braking system. When you do put your foot down the ix35 will hit 60mph in 12.5 seconds and roll up to a maximum speed of 100mph. 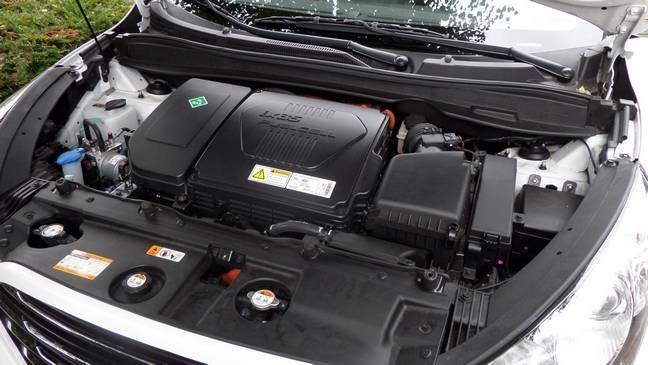 100kW electric motor gives the ix35 Fuel Cell decent performance. 0-62 yours in 12.5 seconds but feels faster on the road

Of course as will all electric cars those performance numbers are rather meaningless. The always-available 300Nm of torque makes for very eager and serene progress at all speeds up to the legal limit. It’s impressively quiet too, and agile.

The last came as a bit of a surprise to me since the ix35 FC has to carry an extra 150kg around compared with the petrol version. Hyundai’s engineers have done a good job keeping the centre of gravity as low as possible and in tuning the suspension to cope with the extra weight.

Refuelling the ix35 couldn't be simpler. Just roll up to a hydrogen filling station (right now there are stations at Heathrow, Hendon and Swindon and three coming to London by year end), pop the filler cap cover, plug in the 700 bar hydrogen fuelling nozzle and ... well that’s it. 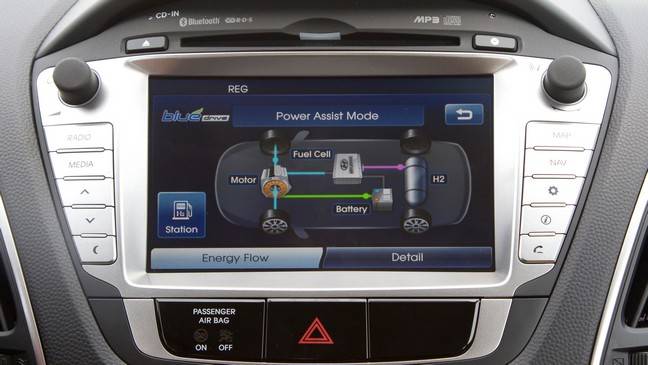 Hydrogen fuel cell, battery and regenerative braking all work together to get you down the road. Feels much like any other EV

It’s just like filling up a petrol car just without the stink of hydrocarbon fumes. Refuelling the ix35 from empty takes about three minutes. Despite the fuel cell power source the ix35 is as wholly unremarkable to operate as it is fill up. In fact driving the thing is as easy as falling off a wet log. Just press the power button and put the drive selector into D and away you go.

How does all this fuel cell malarkey work? Well, in a polymer electrolyte membrane or PEM fuel cell like the one in the ix35, hydrogen is used to generate electricity via a chemical reaction.

The basic component of a fuel cell is composed of two electrodes – a negatively charged anode and a positively charged cathode. The anode is supplied with hydrogen and the cathode with oxygen (extracted from the air) but although the hydrogen molecules are attracted to the cathode, the membrane is designed to allow only the protons to pass through, not the electrons. 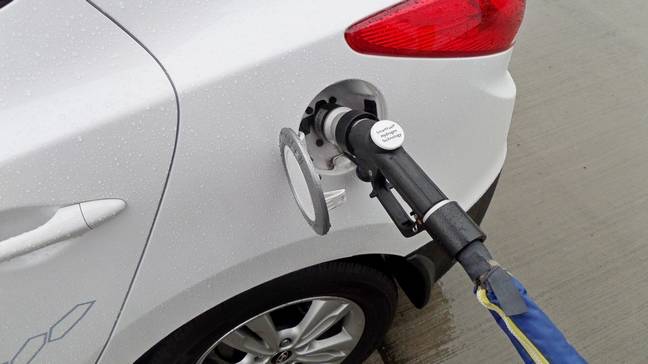 The H+ ions (the protons minus their electron) pass through the membrane, combine with the oxygen to create the only by-product of the process, H2O or water. The electrons, meanwhile, are blocked at the anode level and can only move in an external circuit, thus generating an electric current.

Between them the two fuel tanks in the ix35 can take 5.64kg of hydrogen which according to the trip computer is good for 370 miles (595km). I’d not been driving the thing particularly gently for the 60-odd miles before I topped it up so I have no reason to believe the car was telling porkies.

Doing direct miles-per-gallon comparisons with petrol is a little tricky. But since the ix35 gets about 106km from 1kg of hydrogen and since 1kg of hydrogen can produce a similar amount of energy to 3.7 litres of petrol you could say it’s doing the equivalent of about 29km per litre. Or just over 80 miles per gallon. 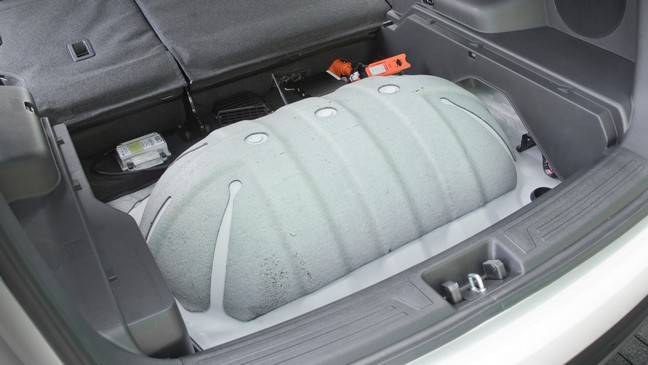 Fuel tanks account for one third of the cost of the vehicle and are rated to 10,000psi, apparently

Toward the end of my day with the ix35 it dawned on me that what I was in effect driving was a range extended EV with a fuel cell power supply.

That’s seemingly Hyundai’s thinking because the next generation car due in 2017 (again a mid-sized SUV but this time available in RHD) will have a much higher capacity battery, a slightly less powerful electric motor, a more aggressive regenerative braking system and a higher power-to-weight ratio thanks to a lower kerb weight.

So much for the car, but how much does pump hydrogen cost to the motorist? Mmmm, bit of a grey area, as currently the only users are commercial and they negotiate a price in advance. Hyundai tells me it pays about the same to fill up a hydrogen ix35 as they would a petrol version, so around £70 or £12 per kilogram.

When it comes to the long-term hydrogen supply line Hyundai UK is both bullish and pessimistic. Bullish because the supply is already there, as “brown” hydrogen is currently vented during existing industrial processes, and potentially there could be “green” hydrogen extracted from water using excess capacity from either nuclear or wind and solar electricity generation.

Hydrogen is a handy way of storing energy from power sources that you can’t just turn off like a conventional gas or coal power station. 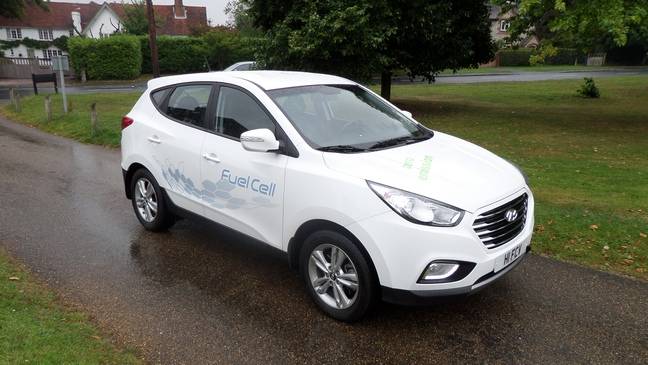 Hydrogen comes from water. A good thing judging by the amount of rain that fell during our day with the ix35 Fuel Cell

Pessimistic because I get the impression that like all the green and alternative energy community in general, Hyundai has no idea what the hell this current government is up to when it comes to renewable energy and low emission transport.

My own view? When the hydrogen highway becomes a reality expect to drive it in Denmark or Germany not the UK where such matters are dismissed as "green crap".

The initial cost of ownership is of course also an issue. The ix35 costs £53,105 (though that's before any OLEV rebate) which is a lot for mid-size Korean SUV.

Surprisingly nearly a third of that cost is the hydrogen fuel tanks, sourced from a manufacturer in the US who are pretty much the only people who make them. The next generation car will use a storage tank built in-house. Incidentally the fuel tanks are rated to 10,000psi and are pretty much indestructible.

Currently, those fuel tanks and a couple of exotic filter elements in the fuel cell stack are the only non-Hyundai parts in the vehicle. That’s a impressive for a car maker that only a decade ago was making cheap automotive tat.

It’s in line with Hyundai’s ambitions in the alternate fuel car arena though. Next year Hyundai will launch a new model in Europe that will be available as a hybrid, a plug-in hybrid and a pure-EV. 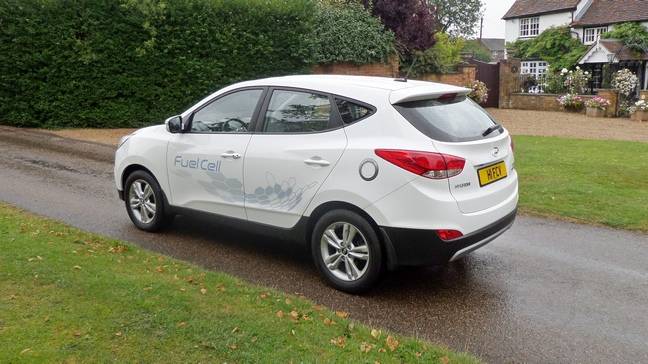 Hyundai reckons we will be seeing these things all over the place by 2030. Good effort from a company that a decade ago was making the Accent and Matrix!

How does Hyundai see the fuel cell electric vehicle future? It reckons there could easily be more than 1.6 million fuel cell vehicles on the UK’s roads by 2030 with 300,000 more being sold each year. By 2050, it thinks fuel cell vehicles will be on course to take as much as 50 per cent new car market. Bold predictions indeed.

It’s early days for hydrogen automobiles but if the ix35 is anything to go by the future is bright. Yes as it stands the vehicle is prohibitively expensive (though Huyndai claim it’s not actually making a loss on each one sold) and the refueling infrastructure is very sparse, but the technology certainly works.

Overall, the ix35 Fuel Cell is a very fine electric vehicle and the hydrogen refuelling station was piece of cake to use.