Davros, Daleks and Missy – a total treat for fans

Last season, Doctor Who came in for some harsh criticism. Many felt it was poorly written, while others laid the blame at the feet of Peter Capaldi. And some of us, including this reviewer, would sooner have chewed off their own arm than endure another minute of Clara and Danny’s mooning.

So it is with huge relief that Season 9 is back on form with a bang! From the eerie handmines, to the glorious return of Missy to some excellent clowning around from Capaldi, this episode had it all. It even managed to throw in an homage to Star Wars – the opening scene is a dead ringer for the Mos Eisley Cantina bar on Tatooine.

The five minute pre-credits (which are still pants) segment, set us up for what is a big two-part opener. No messing about from series creator Steven Moffat, we’re straight into the big moral dilemma here. Davros as a child: kill him or save him? Capaldi’s stricken face should surely silence doubters as to his fitness for the role.

A missing Doctor is not new, and 10 minutes in Clara is roaring around on a motorbike to help UNIT solve the mystery of the frozen airplanes. But viewers are wrong-footed – it’s not Davros trying to make contact, but the formidable Missy. Michelle Gomez is on stonking form delivering arch put-downs to Clara with gusto. Her apparent death at the end of last season was questioned by fans but, thankfully, “death is for other people”. 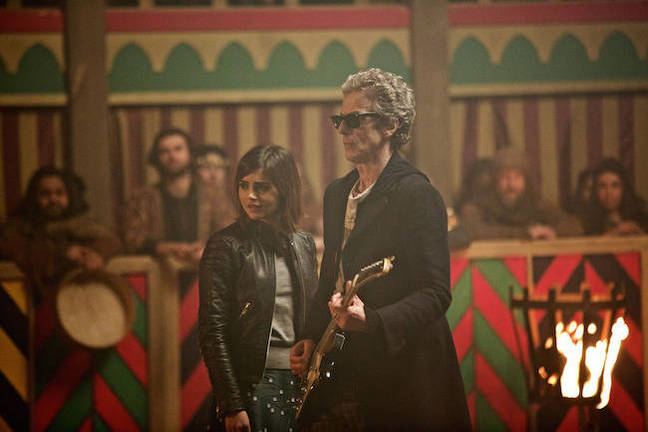 The Doctor’s bad puns and rock star antics add some light relief, before the inevitable arrival of the Daleks. Recent seasons have held back the Doctor’s ultimate enemies for the finale, but Moffat is clearly thinking bigger this time around.

The Doctor and Missy’s complicated relationship looks to be thawing and depositing the three on planet Skaro in the opening episode is a bold move. The Doctor was always one for standing around chatting to monsters, but the conversation with a dying Davros is a distraction from the real action with Clara and Missy.

Missy’s eventual extermination – is death really for other people? Is this another trick? Is it part of a plan to save the Doctor – felt more like the loss of a companion than the demise of The Master.

Of course Clara wasn’t far behind her, but the destruction of the TARDIS is a genuine shock. I’m not buying it for a minute, but a dead Clara and a destroyed TARDIS could mean we may finally have the answer to that question of the last series: is the Doctor a good man? Pointing a death ray at a small child and screaming "Exterminate!" would seem to imply not!

In short: Moffat looks like he is back on form. Peter Capaldi is magnificent and hopefully death really is for other people and Missy will survive to grace future episodes. This reviewer is crossing her fingers for a season-long search for Gallifrey.