We paid how much for the ferret?

Some of the planet's larger IT concerns may be a little nervous today, after the publication of a report by the Australian State of Queensland's Organised Crime Commission of Inquiry (OCCI).

Among the topics covered by the OCCI is Queensland Police's sometimes controversial practice of seeking private sector sponsorship of some of its activities.

A cyber-crime prevention activity that goes by the name of Project Synergy has been identified by the OCCI as being “under investigation” by the state's Crime and Corruption Commission.

One of the project's most recent activities, a conference last August on the Gold Coast, attracted sponsorship from Telstra, FireEye, Checkpoint, Dimension Data, Western Union, HP and Symantec. The Register does not mention those companies to make any allegation of improper behaviour but rather because the OCCI has raised questions about Project Synergy's funding.

The project's aim, according to the OCCI report (available here), was “To build the capability of law enforcement, government, industry and the community to prevent, resist and/or better respond to the threats of identity, financial and cybercrime through events, partnerships, engagement, education, learnings, prevention programs, research, thought leadership and development of creative initiatives”.

The OCCI isn't discussing which aspects of Project Synergy are under investigation.

The conferences organised under the Project Synergy banner raised AU$165,000, according to the Australian Broadcasting Corporation. As well as the two Fraud and Cybercerime Symposium conferences, Project Synergy's activities covered development of two Websites (the Fraud and Cybersafety community awareness site here, and “Fiscal the Fraud-Fighting Ferrett”, designed for children, here). 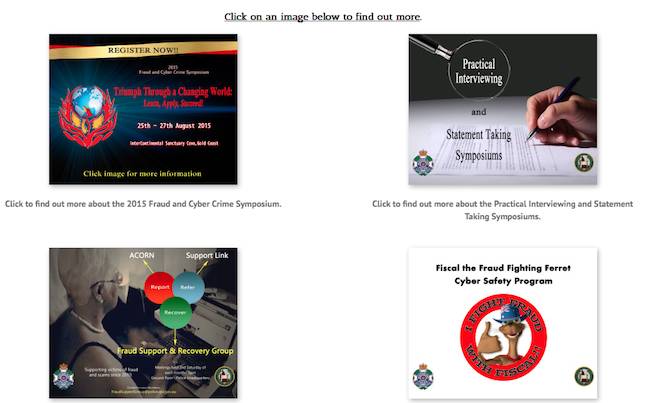 There was also an app, some fraud support/recovery groups, some university partnerships looking at Nigerian scams, and work with AusCERT.

“Superintendent Hay was unable to say how much money is raised annually, except that the conference (also referred to as the symposium) may have raised AU$60,000, and that anywhere between $15,000 and $45,000 might have been generated by the provision of training”, the report says on page 471.

According to the ABC, Queensland Police put the figure somewhat higher, giving the $165,000 figure as what the 2013 and 2014 Fraud and Cybercrime Symposium events raised.

The OCCI believes Fiscal the Fraud Fighting Ferret needs a quick trip to the vet and a fib to the kiddies about a new home on a farm:

“It is also unclear how much money has been spent on the Fiscal project which, to date, has not progressed beyond the pilot presentation in seven schools at the end of 2014”, the report states, and since schools are awash with cybercrime tools, “the Commission considers that scant resources should not be further directed to the Fiscal project”.

The commission is also sharply critical of what it sees as ineffective responses to “boiler-room” scams that operate out of the Gold Coast.

The expression “boiler-rooms” refers to call centres set up in garages, cold-calling people with dodgy investment offers. While some of the scams have been broken up during 2015, the OCCI report says: “it is abundantly clear that efforts to date have been unsuccessful in dealing with the cold-call investment frauds operating on the Gold Coast. In fact, despite the prevention efforts made by the QPS, that type of serious organised crime has flourished, largely unabated”.

Detective Superintendent Brian Hay led the Queensland Police fraud squad for more than a decade, and was a familiar figure at information security conferences such as the annual AusCERT shindig in Queensland.

In 2011, Hay was criticised for intervening in a dispute between two hackers at AusCERT by arresting a journalist and confiscating his tablet computer.

He is currently on extended leave from Queensland Police. ®