George Formby hangs up his bucket and sponge

A team led by Dr Ioannis Papakonstantinou has coupled "pencil-like, conical nanostructures engraved onto the glass" with a photochromic 5-10 nanometre film of vanadium dioxide.

The nanostructures trap air and ensure "only a tiny amount of water comes into contact with the surface". Accordingly, "rain hitting the outside forms spherical droplets that roll easily over the surface – picking up dirt, dust and other contaminants and carrying them away".

A second property of the nanostructures is glare reduction via "the same anti-reflective properties found in the eyes of moths and other creatures that have evolved to hide from predators". The glass "cuts the amount of light reflected internally in a room to less than five per cent", the scientists claim. 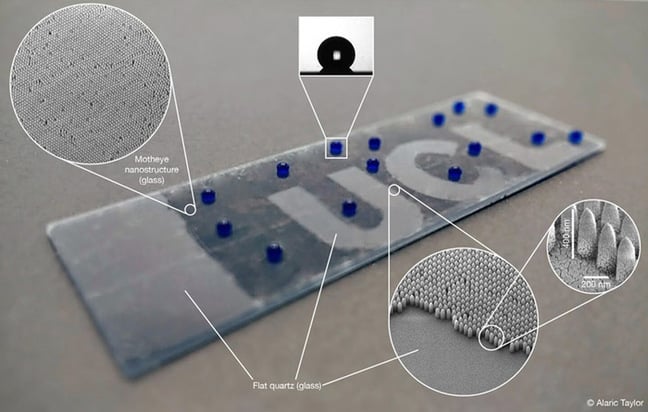 The vanadium dioxide coating, meanwhile, is transparent to infrared light below around 30°C but as its temperature increases gradually becomes more reflective. The UCL team summarises: "During cold periods stops thermal radiation escaping and so prevents heat loss; during hot periods it prevents infrared radiation from the sun entering the building."

Papakonstantinou said: "This is the first time that a nanostructure has been combined with a thermochromic coating. The bio-inspired nanostructure amplifies the thermochromic properties of the coating and the net result is a self-cleaning, highly performing smart window."

The benefits of kitting out buildings with smart windows include heating bill savings of 40 per cent, by UCL's reckoning, plus a serious reduction in window cleaner fees - notably for skyscrapers. Papakonstantinou explained: "It's currently estimated that, because of the obvious difficulties involved, the cost of cleaning a skyscraper's windows in its first five years is the same as the original cost of installing them."

The UCL team is now looking at getting the smart window into production, which involves "scaling up the nano-manufacturing methods, as well as scaling up the vanadium dioxide coating process". If it's successful in attracting industry support, the window could be on the market in three to five years.

In parallel, the scientists hope to develop a smart film with the same properties as the glass for application to existing windows.

To move the tech forward, UCL has secured five-year grant from the European Research Council, to "fabricate smart windows on a large scale and test them under realistic, outdoor environmental conditions". It's looking for a "Research Associate in Nanotechnology & Biomimetic Nanostructures for Smart Window Applications", if any reader has experience of "colloidal lithography, block-copolymer lithography, nanoimprint lithography, laser interference lithography and roll-to-roll processes". ®