WTF is WRF and Clover? Cluster kids use HPC grunt to solve the mystery

HPC blog One of the most interesting parts of the ISC Student Cluster competitions is their inclusion of “mystery” applications and tasks. These are something that the students can’t prepare for. They can only rely on their training and wits to bring them through. 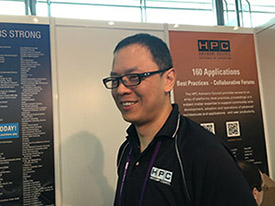 For the 2016 ISC competition, Pak Lui, the Cluster Master in Chief (CMC) came up with a couple of incredibly difficult mystery tasks. (Pak is also known as “The Man who puts the ‘Pak’ into LINPACK” and “The Packmaster”).

The teams were allowed to change their hardware to suit the tasks; reducing the size of their machines, disabling accelerators, and the like. They also had the ability to add hardware if they so desired, but no one did. Pak allowed the teams to see the datasets early so they could figure out just how little hardware they’d need to run it in the allotted time.

During the prep period, teams were busily working to figure out the just how little compute power was necessary to get the apps done in 60 minutes. They already had some experience with WRF, but Cloverleaf was a new application to all of them and needed to be profiled.

Some of the student calculations on power and time to completion were right on the money. Let’s take a look at the results on the mystery apps.

With WRF, if a team did well on it during the competition, they also scored well on it as a mystery application. In fact, the order of finish in the chart mimics how the teams finished on the main competition version of the WRF challenge, as you'll see in the next article in this series.

As you can see, Team USTC came close to perfection on WRF, with Teams Tsinghua and South Africa coming in second and third.

Take a look at what Team Hamburg did on Cloverleaf. They nailed it to the wall, notching a score of 100 per cent on the task, leaving South Africa in second place and third-placed USTC deep in the dust.

This is a noteworthy win because, as mentioned above, none of the teams knew this app was coming. This means that Team Hamburg had to figure out the application and how it would run on their machine in a very limited amount of time. Kudos to them.

In our next ISC article, we’ll wrap things up with a look at who won what and why. Stay tuned… ®