Commvault boss Hammer and pals nail a profit – but only just

After three quarters of losses, Commvault made a $3.2m profit in its final fiscal 2017 quarter, just enough to tip the full year into profit.

Wall Street estimates were beaten as fourth quarter revenues rose 8 per cent year-on-year and 4 per cent quarter-on-quarter to $172.9m

Bob Hammer, Commvault's chairman, president and CEO, talked of, "record quarterly software revenue of $84.7m, representing growth of 15 per cent over the prior year quarter and 10 per cent sequentially."

Services revenue was $88.2m, up 2 per cent year-over-year and flat sequentially. 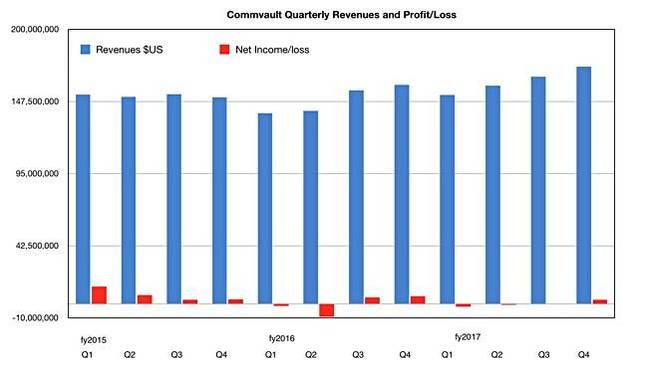 Full year revenues were $650.5m, up 9 per cent annually. Within that software revenues were up 15 per cent at $296.4m and services revenues of $354.1m were up 5 per cent. The chart shows Commvault has returned to growth after the previous year's decline. All its corrective work on sales, product development and pricing has come good.

In January Veeam said its full 2016 year revenues were $607m, making it and Commvault comparable in a revenue sense.

Jason Ader, an analyst at William Blair, offered his thoughts: "Software strength was driven by increasing adoption of Commvault solutions in the cloud, growth of stand-alone products (which carry a 2-times attach rate on other software solutions), healthy uptick in large enterprise deals (representing 57 per cent of software revenue, up 14 per cent year-over-year), and improved sales execution across all theaters (APAC a standout).

"Meanwhile, services revenue (up 3 per cent year-over-year in constant currency and flat sequentially) was also above the consensus, as maintenance renewals remain strong and pricing realignment is largely complete."

Commvault said it saw continued customer growth in the fourth quarter, without revealing numbers, but it did release names like Great-West Life & Annuity Insurance Company and others in the US – plus more in EMEA, such as Papierfabrik August Koehler, and Bank Pembangunan Malaysia Berhad (BPMB) amongst others in the Asia Pacific region.

The outlook for Commvault's fiscal 2018 is around $700m. The indefatigable Rakers expects Commvault to deliver "hyper-converged software focused on the secondary storage market, as well as expanded managed services offerings" in the next 12 months.

We believe the foundation is being set for sustained double-digit software growth, based on: 1) continued adoption of the cloud-centric Commvault Data Platform along with a growing menu of stand-alone data protection solutions, 2) improving sales execution and productivity (still upside potential here), 3) new subscription-based pricing options (which should attract capex-sensitive customers and enable the company to tap into new budget sources), and 4) expanding distribution leverage (as Microsoft and Amazon partnerships continue to ramp up).

If Bob Hammer and his execs execute as well as they have this year, then they will feel even more analyst love. ®