We've already got one tried and tested system, huffs MoD 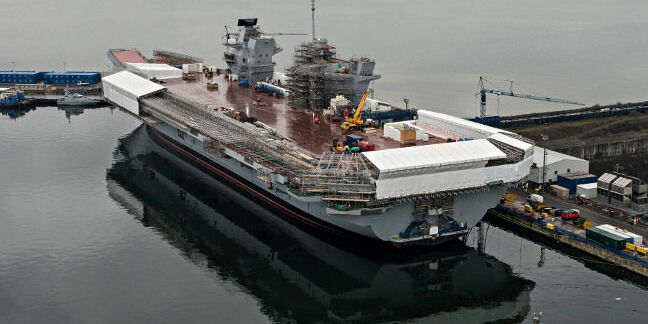 The Ministry of Defence has insisted it has made “no decision” to install the US Navy’s JPALS aircraft carrier landing system aboard HMS Prince of Wales, the second of the Royal Navy’s two new 65,000-tonne aircraft carriers.

US defence contractor Raytheon this week said it was in talks with the MoD over fitting its JPALS product, the US Navy’s future carrier landing system of choice, to PoW. The MoD, however, is – publicly, at least – not keen to be seen as picking a supplier just yet.

Reading between the lines, it seems that Raytheon’s talks may have been along the lines of them saying “We’d like to sell you this!” with the UK’s response being a non-committal grunt. The company’s veep of transport and support services told Flight Daily News: “We’re working with the UK government to see if we can add this to the second ship.”

PoW will not enter service until well after her much-lionised sister. Her initial role will be as the UK’s helicopter carrier, though F-35 flight trials will take place aboard her in the middle of the next decade.

QE, the first of the two new British carriers, is due to make her maiden voyage from the Scottish shipyard where she was assembled sometime in the next few months. She is delayed by several months, with both the MoD and the ship’s builders keeping extremely tight-lipped as to why.

“HMS Queen Elizabeth is fitted with an SPN-41 Instrument Landing System and this, together with the ship’s radar systems, provides a robust precision landing capability,” added the MoD’s spokesman in response to our questions.

The AN/SPN-41 system is noted by the USN to be beyond the end of its “original expected service life”, though the USN Air Systems Command page about the system does refer to American ships that have had it in use for several years. While one hopes that the RN hasn’t installed equipment that needs the removal of “obsolete components” aboard a brand new warship, it makes good sense to use a tried-and-tested system for landing brand new aircraft aboard a brand new ship.

The same landing system is also installed aboard the Italian Navy’s flagship, the aircraft carrier Cavour. Italy is the only other country apart from the UK and US to buy the F-35B.

A rather old webpage from the Federation of American Scientists explains in not-so-complex language how the AN/SPN-41 set works. It’s basically a navalised Instrument Landing System that broadcasts a glideslope along with azimuth information for arriving aircraft. The cockpit display consists of two needles, and once the pilot centres them both, he’s on the right path.

JPALS, by contrast, is a GPS-based system. Rather than the ship broadcasting a glideslope to world+dog, JPALS emits an encrypted burst of data that allows the approaching aircraft to precisely fix the ship's position and make a safe landing. The USN is buying 22 JPALS sets for use with its F-35Cs and the USMC’s F-35Bs. ®

And it weighs the same as 5.7 million adult badgers

Small matter of an ongoing personnel shortage, though

System might only be fitted to HMS Prince of Wales – reports

HMS Queen Elizabeth prepares to sail for the first time